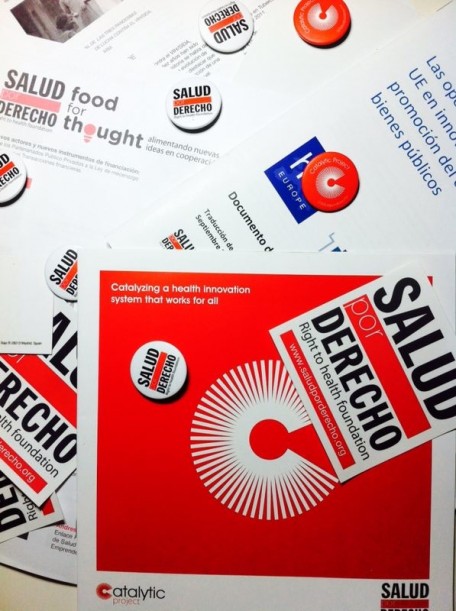 2013 was a very busy year at Salud por Derecho. Here is a brief overview of some of the main activities that we carried out over the last 12 months.

At the beginning of the year, we were in Honduras, visiting centers that receive financing from the Global Fund to fight AIDS, Tuberculosis, and Malaria, collecting data and testimonies of what the fight against these pandemics means for impoverished countries.

This year has also been marked by the launch of the Catalytic Project, through which we have carried out five breakfast meetings with researchers across Spain, involving new actors in the promotion of health needs-driven biomedical innovation policies. Through the Catalytic Project, we have also had the opportunity to strengthen our partnerships with organizations across Europe including BUKO Pharma and UAEM, generating more discussion forums on the current innovation system, open access, and health R&D.

In September, we brought together a variety of actors during our first “Food for Thought” lunch debate, which sought to foster new ideas in development cooperation. Public-private partnerships and the development of technologies through social entrepreneurship were some of the topics discussed among the 18 participants, who posed problems and possibilities for collaboration.

This year, we also had the opportunity to organize a breakfast at the residence of the French Ambassador in Madrid in which the government of Spain confirmed that in 2013, they would not provide funds to the Global Fund to Fight AIDS, Tuberculosis and Malaria, despite promises made by President Rajoy in the summer of 2012.

2013 has been a fruitful year for our advocacy and communication, laying the foundation for new possibilities in 2014, which we’ve already started with the launch of the campaign #yodeseo2014.

We wish you all a very Happy New Year.