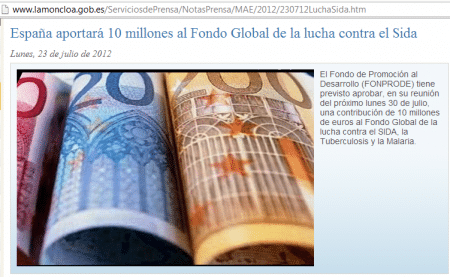 365 Days since the Government’s False Promise

Today, July 23, marks a year since the promise the Government made public: that Spain was once again going to be a donor of the Global Fund to Fight Aids, tuberculosis and malaria. The information came out in the newspapers and even on the official website of the Moncloa, where the good news was announced under the title of “Spain will contribute 10 million to the Global Fund to Fight Aids”. The Government stated that with this contribution, Spain resumed aid to those in need and that this support was evidence of “the priority Spanish cooperation has with the most pressing issues, such as basic social services and towards the neediest.” The official news even goes further and mentions that the committed money intended to help 200,000 people identified by the Global Fund as those affected by “the suspension [by Spain], in previous years, of contributions to this Fund”.

The news of the resumed Spanish contribution brought joy to our organization since we had worked hard to put pressure on the Government to return to being a donor of the Fund. Only a few days before, we had published an open letter to the Minister García-Margallo asking that the government announce a contribution by Spain to the Fund, taking advantage of the 19th International Conference on AIDS which was held that same week in Washington. In spite of the fact that 10 million euros is not even a tenth of what Spain was giving, we thought that the undertaking was a good first step on the part of the government after two years without making any contribution. In any case, we published a press release with our allies, Doctors without Borders, declaring our official position on the matter: the Spanish contribution was not at the height of the urgent needs of the AIDS pandemic and it was inconsistent with the commitments made by Spain with the UN.

The days and weeks turned into months and the payment of the money was not made effective. We met with members of the Government, got together with parliamentarians, made calls and sent letters; the official response was that there was a “slight delay”, but that the payment would be effective soon. How were we supposed to doubt this? The Declaration was officially made from Moncloa and even the Global Fund had publicly thanked the commitment of Spain. In the words of its Director General at the time, Gabriel Jaramillo, the Spanish contribution reflected the “generosity and solidarity that has always characterized the people and the Government of Spain”.

Despite all the public statements and the promises from the minister, a letter from Moncloa confirmed that finally the payment to the Global Fund would not become effective due to budget cuts. No public apology, no official communication, the Government decided to withdraw the promise. What happens to the credibility of our country? Or of Spain’s brand that we intend to sell abroad? What happens with the commitment to help to give “basic social services and helping the neediest”? The government’s promises were just empty words and our presence in an international organization is like a simple adornment.

Most Spaniards do not know this, but every one of us owes €0.22 to the Global Fund as a result of our Government’s unfulfilled promise. If each of us gave twenty-two cents to the Global Fund not only would we be compensating for Spain’s empty promise, but we would be helping Spain do their job of keeping millions of people with HIV/AIDS alive every day. More than 4 million people currently receive daily treatment of antiretroviral drugs thanks to the Fund, and the goal for the next three years is to give treatment to more than 7 million people. This goal can only be effective if donor countries meet their commitment to actively fight against HIV in the world.

At the end of the year, the Global Fund will hold its Pledging Conference where each donor country will make public their contributions for the next three years. There are countries that have already made a public commitment, such as France, which last week announced its contribution of €1.08 billion, or the United States, which has already announced its intention to allocate $5 billion if the rest of donors come to the $ 10 billion (because the US cannot fund more than a third of the organization). Spain, which became the fourth donor to the Fund in the year 2009, has not yet decided on this issue. Salud por Derecho will continue to work to ensure that Spain will once again be among the donor countries.

In 2009 Spain became the fourth donor to the Global Fund, with a commitment of 200 million dollars a year between 2008 and 2010. In the year 2010, Spain only committed half of the money and in 2011 Spain ended its contribution. Last year Spain announced its commitment to return as a donor to the Fund and provide 10 million euros, although to date this payment still has not become effective.