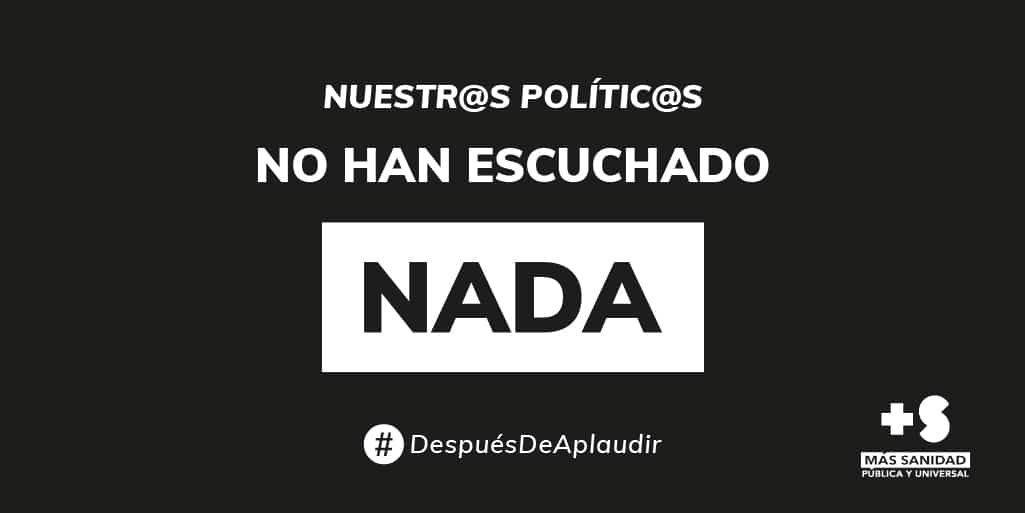 Commission for Reconstruction: applause for public health dies down in Congress

The expressions “disappointment” and “they haven’t heard A THING” summarise the response of the more than twenty social, health and trade union organisations promoting the Más Sanidad (More Healthcare) alliance following the final decision on public health and health care by the plenary session of the Congress of Deputies, which puts an end to almost three months of work by the Commission for Social and Economic Reconstruction. These organisations believe that the Commission’s commitments are patently insufficient and fail to respond to several structural issues in Spanish health care which have been underscored by the COVID-19 pandemic, such as the lack of funding, a medicines policy that puts the public interest before that of major pharmaceutical companies, and protection from privatisation.

After more than two months of work, with dozens of expert briefings and multiple reports from civil society, the political parties “haven’t heard a thing”, the organisations say. “It’s striking that, given the scale of the crisis we’ve experienced, the decision on Health and Public Health and Health Care—unlike the Commission’s other conclusions—lacks an initial diagnosis on which to base the proposed measures. It’s impossible to find the solution to a problem without knowing its causes”, they add.

The Commission, they point out, “has failed to evaluate health policies over the last decade, which have been shaped by austerity and the promotion of privatisation”. As a result, the final decision that will guide the necessary reforms of the Spanish National Healthcare System in the coming months is marked by ambiguity and a lack of explicit commitments in key areas aimed at ensuring quality public and universal health care, the organisations say.

Months remain to adopt the strengthening measures needed to restore our healthcare system to its rightful place as a cornerstone of the welfare state, but for this to happen, we need a bolder approach and commitment from our policies and politicians.

No clear commitments on funding

No strengthening of health care is viable without the corresponding financial support. However, the section on the funding of the Spanish National Healthcare System (NHS) is notable for its lack of specific commitments. In this regard, the organisations note that:

Ensuring the full universality of health care is urgent, particularly during a pandemic

The Commission aims to strengthen and consolidate the universality of health care as an objective, but its findings suffer from two major omissions:

The importance of prevention in public health

The current crisis created by COVID-19 has made clear that when it comes to public health, action must also be taken to tackle those social and material conditions that are determinants of health. In this sense, the organisations consider it essential:

This applies both to pharmaceutical policy and intellectual property in the research and development of medicines. The Commission for Reconstruction has missed the opportunity to further explore many changes that are urgently needed if access to and affordability of medicines and health technologies are to be ensured. Missing are:

No provisions to protect the Spanish National Health System from privatisation

The pandemic has exposed the need to increase the resources of publicly managed health centres, as the clinical management of the pandemic has hinged on these points of care. According to the signatory organisations, “this decapitalisation of the public sector is not only a consequence of the budget cuts of the last decade, but also of the commitment to privatisation models that divert a significant proportion of scarce resources to the private sector. These models have not only proved to be more inefficient than direct public management, but also aggravate inequity, weakening everyone’s right to health protection”.

In light of this situation, these organisations request: