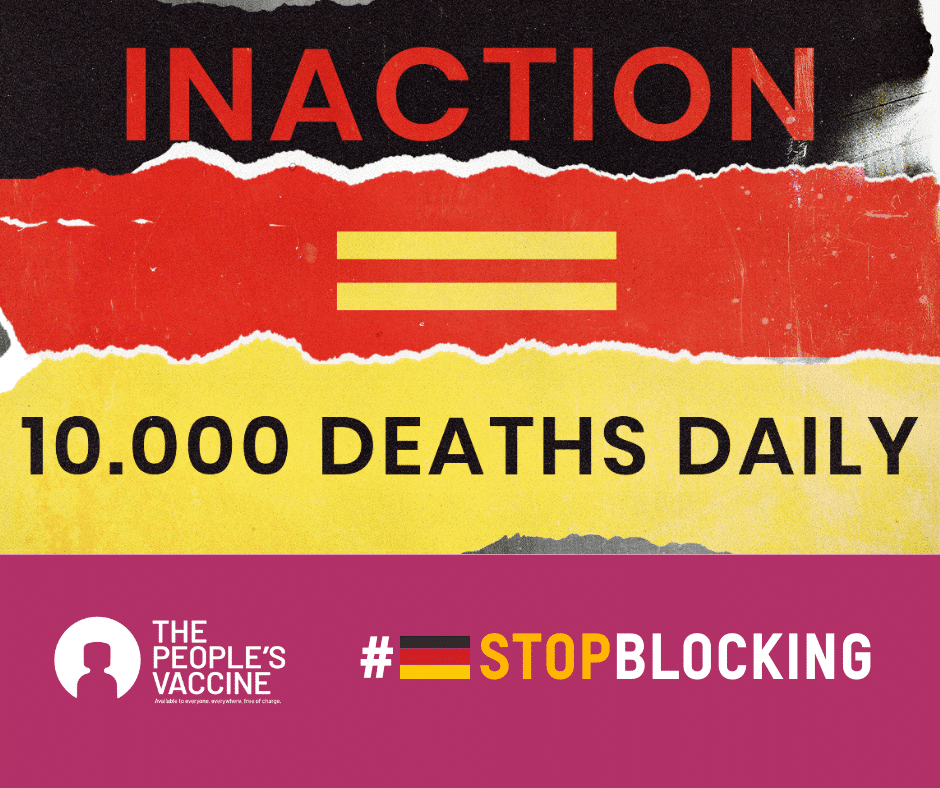 More than 140 former heads of state and government and Nobel laureates today called on the candidates to be the next German chancellor Annalena Baerbock, Olaf Scholz, and Armin Laschet to declare themselves in favour of waiving intellectual property rules for COVID 19 vaccines and transferring vaccine technologies, and “to make these the policies of any future coalition government”. The signatories underlined that ending German opposition to waiving patents is vital to overcoming vaccine monopolies, transferring vaccine technology and scaling up vaccine manufacturing around the world to prevent millions more deaths from Covid-19.

Former world leaders including former President of France François Hollande, former Prime Minister of the United Kingdom Gordon Brown, former President of Colombia Juan Manuel Santos, former President of Malawi Joyce Banda and Nobel prize winners including Professor Joseph Stiglitz, Professor Francoise Barre-Sinoussi and Elfriede Jelinek express that they are “deeply concerned with Germany’s continued opposition to a temporary waiver of the World Trade Organization’s (WTO) intellectual property rules”, at a time in which “the artificial restriction on manufacturing and supply is leading to thousands of unnecessary deaths from COVID-19 each day”. Less than two per cent of adults are fully vaccinated in low-income countries compared to almost 50 per cent in high income countries.

Signatories urge the three candidates to support a wide and comprehensive waiver of the TRIPS intellectual property agreement on all COVID-19-related technologies at the WTO, and join over 100 countries including the United States and France in doing so. Despite that, Germany continues to oppose a waiver of the trade-related aspects of intellectual property (TRIPS) agreement for Covid-19 vaccines and treatments at the WTO. First proposed by India and South Africa in October 2020, a waiver is now supported by more than 100 nations, with France and the United States announcing their support earlier this year.

The letter emphasizes that “Having helped create the most successful vaccine technology against COVID-19, by overcoming pharmaceutical monopolies and insisting that the technology be shared, Germany has the ability to help end this pandemic”. In addition to supporting the waiver they call on the next Chancellor to ensure that German pharmaceutical companies openly and rapidly share lifesaving mRNA vaccine technology with qualified producers around the world.

Joseph Stiglitz, Nobel Economics Prize Laureate, said: “The new Chancellor of Germany will hold extraordinary power to turn the tide on this horrific pandemic and can be the world leader remembered for helping save millions of lives. Intellectual property rules are today locking out people across the world from the benefits of life-saving science – it is time for Germany to ensure the transfer of vaccine technologies and join the rest of the world in backing a temporary waiver at the World Trade Organization”.

Helen Clark, former Prime Minister of New Zealand, said: “Germany’s support for a TRIPS waiver in the exceptional circumstances presented by COVID-19 would send a clear signal that all peoples should be able to benefit speedily from available vaccines and therapeutics. Widespread vaccination now and further scaling up of vaccine production will play a significant role in curbing the pandemic.” As the Heads of State and Government and Nobel Laureates write to the candidates for Chancellors, activists around the world have organized protests to demand the German government to stop blocking efforts to vaccinate the world. Protests will take place from the city of Nairobi to the Sydney Opera House in Australia, from the Union Buildings in Pretoria to Brazil’s famous Cristo Rei and the famous Golden Gate Bridge in San Francisco.

The letter, which was coordinated by the People’s Vaccine Alliance, a coalition of more than 70 organizations including Club de Madrid, Oxfam and UNAIDS, warned that extreme vaccine inequity is bound to last as long as there will be no remarkable increase in vaccine production. While highincome countries are now starting to offer their citizens booster shots, the global supply falls far short of the levels needed to provide global vaccination coverage.