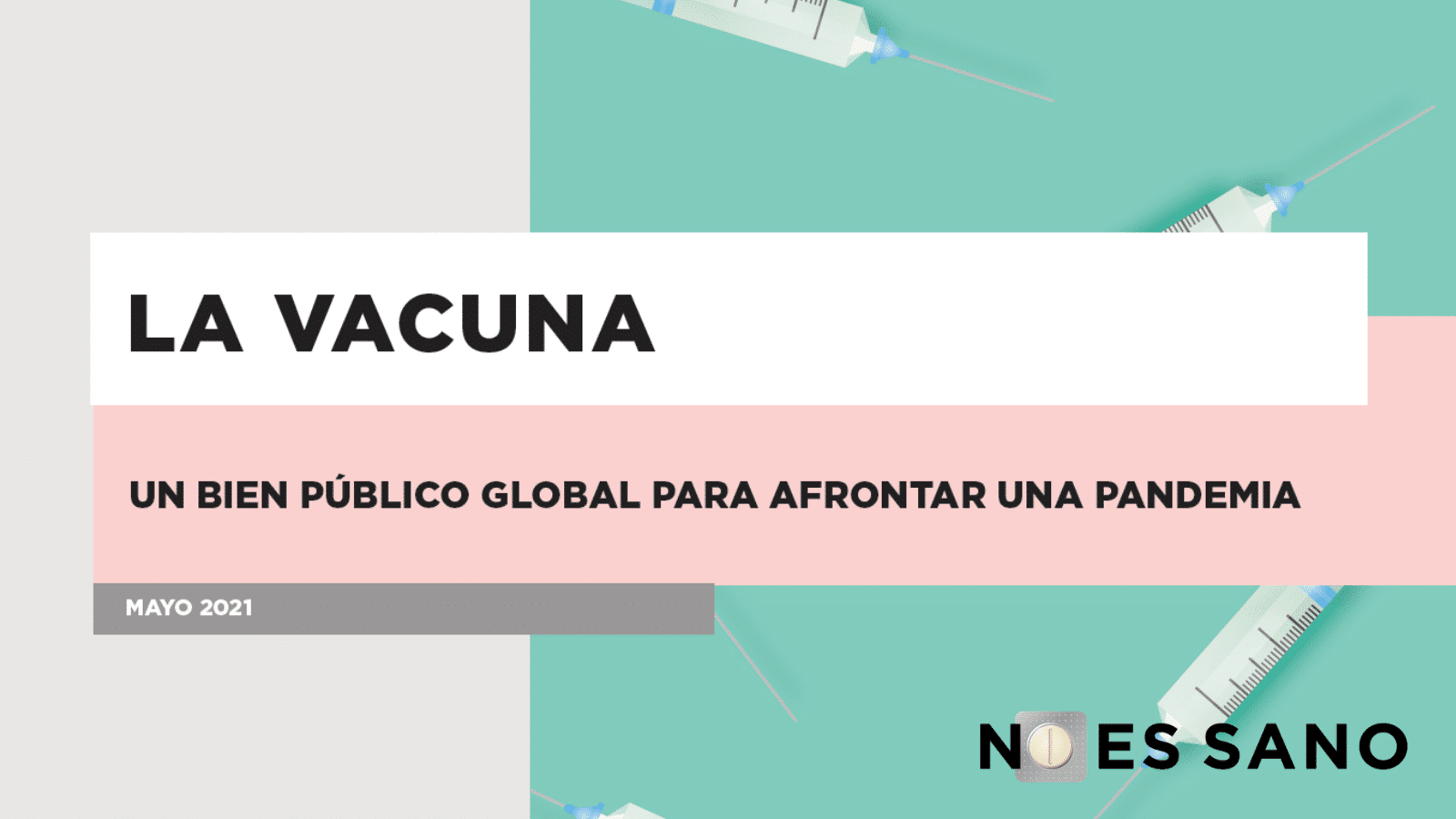 27 May 2021. Governments all over the world have invested enormous amounts of public money to boost research as well as the production and supply capacity of the large companies behind the main vaccines developed to fight against Covid-19. Additionally, this public backing plays a much more extensive role. The origins of many of these vaccines lie in projects conducted for years in public research centres all over the world as shown in the report “La vacuna: un bien público global para afrontar una pandemia” (The vaccine: a global public asset in the fight against a pandemic) released today by No Es Sano (It’s Not Healthy), a campaign promoted by Salud por Derecho. It makes a detailed study of the main vaccines that are available globally, their origins, their funding, aspects related to their intellectual property, purchase agreements, and their different prices.

Public funding as a lifeline

Since the onset of the pandemic, public and humanitarian funding for the research and development of vaccines (not including financial support for other matters such as expanding dosage production and distribution capacity) has amounted to nearly 5 billion euros. The lion’s share of this public investment—more than 98%— has been made by Governments, led by the United States and Germany, according to the report. Some of the companies that have received the most funding are Moderna, Janssen, CureVac and the Pfizer/BioNTech alliance. Together, they account for more than half of this public funding.

Nevertheless, the research that led to the development of these vaccines began much earlier than the pandemic and was also funded with public money. As an example, the report points to research on messenger RNA (used by Pfizer, Moderna and CureVac to successfully develop vaccines) that had been ongoing for four decades; or the case of the AstraZeneca vaccine, which was one of the first to be developed thanks to clinical trials with other coronaviruses conducted previously in Oxford University.

Although, at the start of the pandemic, many Governments insisted that vaccines should be considered global public goods given the significant amounts of public money invested, neither the States nor financial bodies have made any contribution to this effort. This report mentions that the funding contracts do not include conditions to ensure relevant aspects such as the fair pricing of vaccines resulting from this public investment and full access to related data. On the contrary, all of this knowledge has ended up in the hands of companies with exclusive licenses and confidentiality has been imposed on all production and distribution agreements reached with Governments and international organisations. Additionally, and in spite of being in the midst of a pandemic, they are allowed to set vaccine prices according to market rules. In the case of Pfizer, for example, they range between 7 dollars paid by Tunisia and 47 dollars paid by Israel, which could have given the latter preferential access to the doses. The Moderna vaccine ranges between 15 and 37 dollars per dose; AstraZeneca costs up to 2.9 euros in the EU, but other countries such as South Africa and Uganda have paid 5.25 and 7 dollars, respectively.

Vaccines are our hope in the fight against the pandemic. However, vaccines are of no use if they are withheld from millions of persons. Around 12 billion doses are required to cover 75% of the world’s population and until now, pharmaceutical companies have been unable to fulfil this production goal. The report concludes that currently more than 8.870 billion doses have been promised in advance sales at the global level, around 7.750 billion through bilateral agreements, and 1.120 billion through Covax (the global mechanism for the joint purchase of Covid-19 vaccines). Of this total, 53% —more than 4.7 billion— doses have been reserved by rich countries. Meanwhile, middle and low-income countries are only guaranteed a bare 17% of the total. At the same time, countries such as the United Kingdom and Canada have enough doses to vaccinate their entire population three and nearly four times, respectively.

Pharmaceutical companies estimated a production of 9.5 billion doses for 2021 and so far, only somewhat more than 1.5 billion have been distributed (data updated as of XX/05/2020). The companies that hold the patents and the technical know-how have maintained their control over production and refuse to share their knowledge. Proof of this lies in their rejection of C-TAP, a mechanism promoted by the WHO to voluntarily share data and intellectual property with other countries. On the contrary, they have reached bilateral agreements with partner companies for completing dosage production or in many cases, partially transferring their know-how and sub-contracting only a few stages, such as the production of the active substance or the filling and finishing of the vials.

Under the control of these companies, the production of the approved vaccines has remained highly concentrated within high-income countries, mainly in Europe and the United States. Nevertheless, as this report points out, there is production potential in Asia, Latin America and Africa that is being ignored. Countries such as Bangladesh or Vietnam could be included, thus greatly expanding the capacity of other countries that are already producing vaccines such as Argentina, India or the United States, as well as in Europe. The agreements that have been reached until now have shown that partner companies need at least six months to gear up and start production.

Among other measures, the report recommends that Governments, pharmaceutical companies and research centres join the C-TAP initiative. Likewise, it calls on States to support the initiative promoted by India and South Africa to temporarily suspend patents and other intellectual property rights, as well as to undertake technology transfer procedures and the know-how required to increase production, capacity and distribution. Both proposals will speed up the knowledge exchange, development and production, not only of vaccines but of all technologies required to fight against COVID-19.

Report available at this link (in Spanish) or by clicking on the image below. 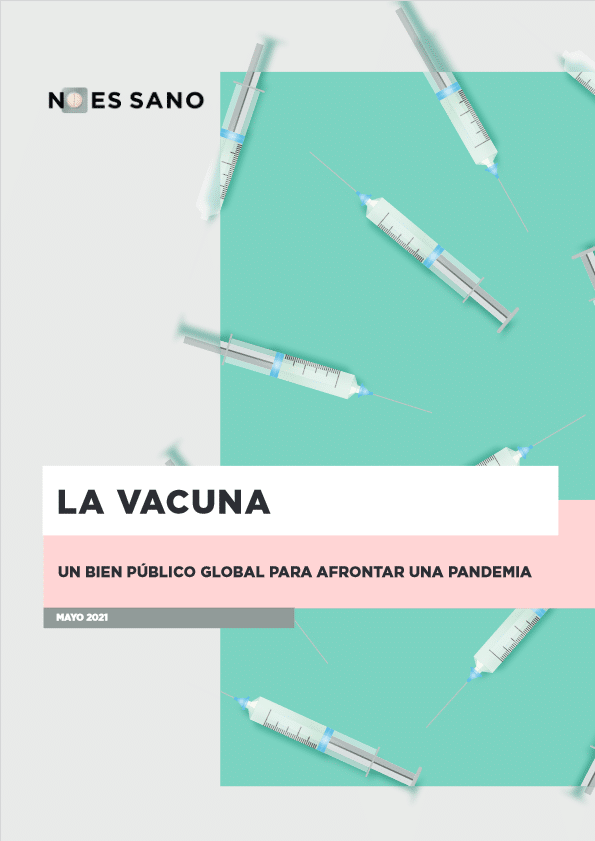