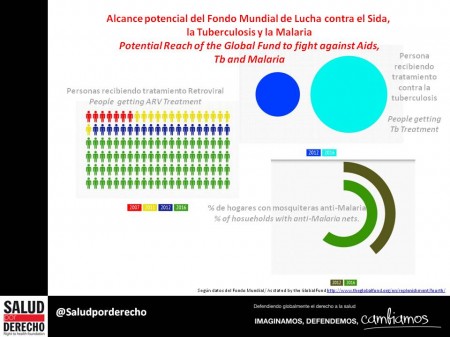 Potential Reach of the 4th Replenishment Meeting of Global Fund to fight Aids, TB and Malaria

A few weeks ago we introduced to you a document regarding the new financial system of the Global Fund to Fight AIDS, TB and Malaria as it represents a key issue in the fight against these three global pandemics.

Despite the fact that the current global economic crisis may affect the contributions to this organism, donor countries should keep supporting it in order not to throw away the major achievements of past years. At the end of 2013 the contributions of each donor country should be officially stated and committed to the Global Fund, and even though the US and France have already committed a very positive contribution, there is no certainty that the global amount will reach the objective of 15 billion US$ for the period 2014-2016. This disbursement wouldn’t just keep the current Global Fund’s projects going, but would also mean a high quality and firm improvement in the fight against these diseases.

The Country Donors meeting will be held in the last quarter of this year. At this event, the Global Fund hopes to reach the objective of 15 billion US$ commitment and therefore get the chance to greatly improve global health.

You can read more information regarding the Global Fund Goals and its milestones by clicking here.