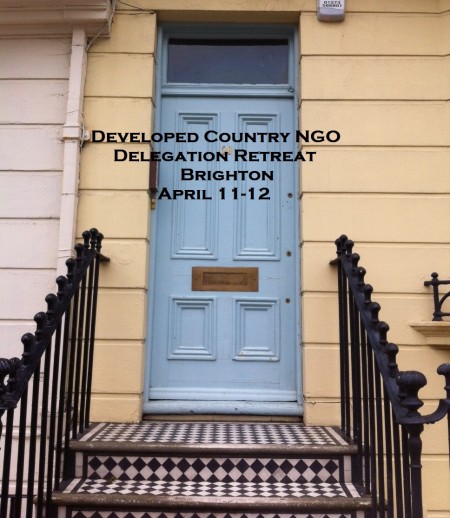 Retreat: Delegation of Developed Country NGO Delegation to the Global Fund Board

On April 11th and 12th, Vanessa López, Director of Salud por Derecho participated in a retreat of the Delegation of Developed Country NGO Delegation to the Global Fund Board which took place in Brighton, at the headquarters of the International HIV Alliance. It is a strategic meeting annually organized by this civil society delegation which has a seat on the Fund’s Board and with representatives from organizations of donor countries such as the United States, United Kingdom, France, Germany, the Netherlands or Spain. Salud por Derecho has been involved for years in this delegation and there have been several occasions where we have been a part of the group of ten people who attend in-person the Global Fund Board meetings.

2013 is a key year because during the fall there will be a Replenishment Conference of this financial organization dedicated to distributing funds to develop prevention and treatment programs in the most affected countries and in which the donor countries will make commitments regarding their contributions for the period 2014-2017. This, along with the process to define the new principles and criteria that will guide the decisions of funding distributing among implanting countries, were the main themes discussed during the retreat. In addition, it established a process by which the delegation would elect the new representative of the delegation to the Board of Directors of the Global Fund, who would replace Alvaro Bermejo, director of the International HIV Alliance and member of the Board of Directors since 2011.

You can get more information on the governance of the Global Fund, its board of directors and the role of civil society.