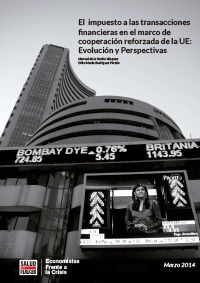 The year 2014 is key to the Financial Transaction Tax, FTT, even more, this is the year when 11 countries from Europe Union, among which is Spain, is pledged to implement this new rate. It is not known a lot about it at this moment, specially about the destination of the founds is concerned.  That´s because, in the forthcoming of European elections, Salud por Derecho and Economistas Frente a la Crisis publish the report: “The Financial Transaction Tax in the framework EU Enhance Cooperation: evolution and perspectives”.

The document, written by economist Manuel de La Rocha Vázquez, and the sociologist Erica Rodríguez Pinzón, analyzes the evolution of the tax since it was proposed by European Comission in 2011. The paper considers some aspects as political and social support that Robin Hood Tax have had, its benefits, the challenges that governments will face to implement it, and one of the most relevant aspects for citizens: the founds use.

Here you can get an infographic with the main information on the FTT.