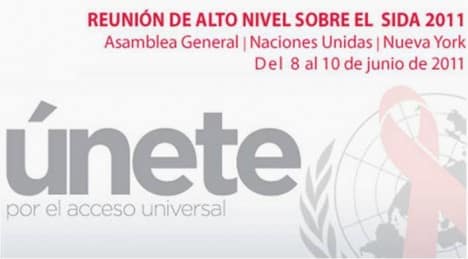 Thirty years into the AIDS epidemic, and 10 years since the landmark UN General Assembly Special Session on HIV/AIDS, the international community will come together to review progress and chart the future course of the global AIDS response at the 2011 UN General Assembly High-Level Meeting on AIDS from 8–10 June 2011 in New York.

Member States, including Spain, should adopt a new Declaration reaffirming the commitments made so far and a set of actions that help to guide and sustain the global response to AIDS in the near future. However, it seems that the international community and especially the European Union are unwilling to set neither specific goals nor clear objectives of treatment coverage, although their efficacy has been proven.  The General Secretary himself, Ban Ki-Moon, has called on donors to support the establishment of a new global goal of access to treatment: 13 million people by 2015.

The absence of a cure, expandability, stigma and discrimination associated with the disease, the absence of a preventive vaccine and the fact that the treatment is for life, together with the high cost of new drugs and the external dependency to afford the treatments in many poor countries, make it difficult to expand the achievements made thus far in the struggle against HIV/AIDS as well as meet the challenges that the pandemic poses in the short and long term.

The new data collected by UNAIDS shows clearly that very important continuous improvements are being achieved, which will, among other things, end by 2015 the vertical transmission of HIV from mother to child. However, and despite the increase in overall funding available that has been key to the great results achieved, global resources to combat the epidemic have been frozen and donors refuse to commit to mobilize the needed additional resources. Without them, it will be impossible to achieve the objectives.

Tenemos SIDA, the network coordinated by Salud por Derecho, takes part inthe Spanish delegation attending the High Level meeting in New York as representative of civil society. In order to support the Spanish position there, Tenemos SIDA has produced a document with recommendations that Spain should hopefully coordinate with the main requests of international civil society, which different political parties at the European Parliament have demanded of the international community and of the European Union.