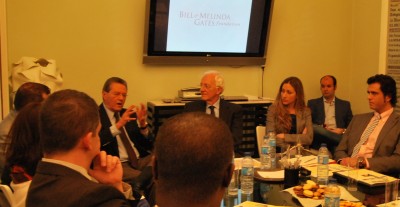 Yesterday, our Executive Director, Vanessa López, participated as a speaker at a workshop organized by Euroactiv under the theme: “The Budget of the EU Aid for the period 2014-2020: Is it Sufficient to Achieve the Objectives?”  The event, which had the support of the Bill and Melinda Gates Foundation, was moderated by Mr. Rafael Ramonet, President of Prestomedia.

Along with Vanessa Lopez, the following people presented on the current situation of the Spanish Cooperation: Francisco Quesada Benavente, Cabinet of the Secretary General of International Cooperation; Federico Buyolo, Congressman Spokesperson of the Socialist Group in the Committee on Cooperation of the Congress and Concha Lopez,director of PLAN Spain.

The discussion during the workshop focused mainly on the current situation of the Spanish cooperation. Besides the subject related to large cuts that have taken place in the sector, they also discussed possible funding alternatives. Congressman Federico Buyolo shared the recently presented Law proposal of the Socialist Group on micro sponsorship, which seeks to encourage donations to NGOs in Spain allowing the deduction of 100% income tax for the first 150€.

In addition, Vanessa López presented the proposal of the Robin Hood Alliance, of which Salud por Derecho is a part of, requesting that all income from the financial transaction tax is allocated for social purposes in Spain and abroad.