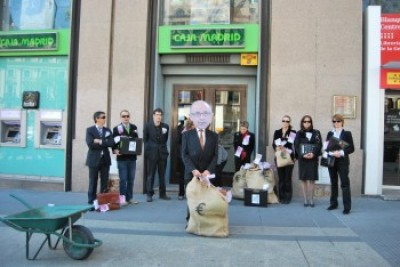 Salud por Derecho has participated in the launch of the new campaign promoted by the Alliance for the Robin Hood Tax. The campaign aims for Spain to make the decision to allocate the funds gathered through financial transactions tax (FTT) to social purposes. Along with a street action we carried out, a campaign has been launched through Avaaz to gather signatures by citizens in favor of this cause.

The street action consisted of a person dressed up as Finance Minister Cristobal Montoro, who along with his staff were carrying a wheelbarrow giving away 5,000 million euros to banks. Precisely what the Robin Hood Alliance wants to prevent.

During the event the spokespersons of the Alliance, our Executive Director, Vanessa López and Jaime Atienza, Director of Campaigns and Citizenship of Intermon Oxfam, said that the government needs to implement the FTT as soon as possible and earmark it to the people who are most in need, both in Spain and in the world.

It is estimated that the FTT in Spain could raise € 5,000 million. The Robin Hood Alliance proposes that the money raised should be distributed as follows:

– 50% of the revenues to combat world poverty and climate change.

Do not forget to sign the petition on the Avaaz page to tell Montoro we do not want the funds gathered to go back to the banks.

You can also see the pictures!