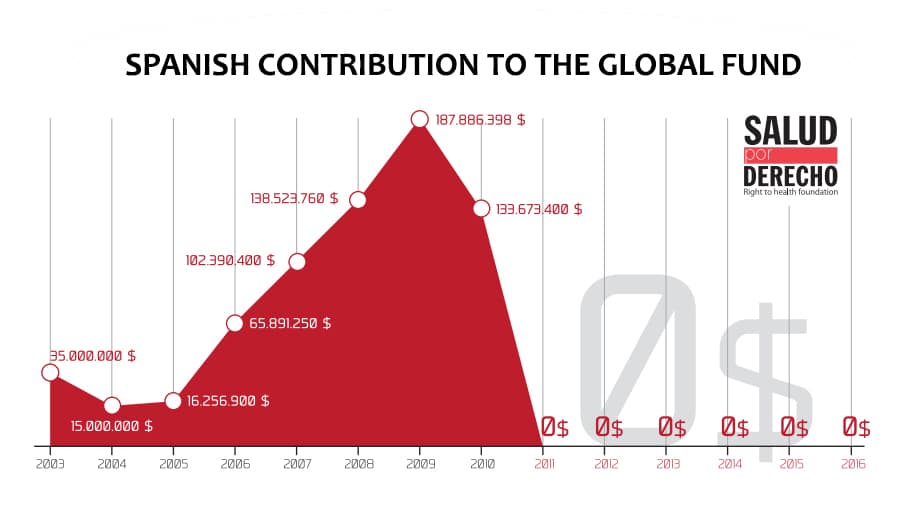 The entire Parliament, including the PP party, is asking the Government for 100 million euros for the Global Fund to Fight AIDS

Madrid, 1 December– Last week, in Spain, all of the parliamentary groups unanimously approved a Non Binding Proposal (NBP) asking the Government to again become a donor to the Global Fund to Fight AIDS, Tuberculosis and Malaria with a contribution that is “appropriate for the needs and goals set forth by the Fund and Spain’s weight with respect to the entire community of European countries that donate to said Fund”.

The NBP was presented by the Socialist Group on 16th September, days before the Global Fund Replenishment Conference where countries from all over the world made financial commitments for the next three years (2017-2019). The text indicated a sum of 100 million euros as has been demanded for months by various civil organizations; it requests the first 30 million to be dispersed in 2017.

“At one time, Spain was the fifth leading donor to the Global Fund having invested nearly 600 million euros in the last decade. But it stopped contributing money in 2011 and has not offered a single cent since then,” says Vanessa López, Director of Health by Right.  “In the last legislature and despite parliamentary agreement, the Government hid behind the fact that it was only an acting government as an impediment to committing any sort of sum. Now it has no excuse”.

The Global Fund, which raised and invested 3.5 billion euros last year to fund AIDS and other pandemic programs, now offers treatment to nearly half of the 18 million people currently with access and has saved more than 20 million lives since its foundation in 2002. “It’s a fundamental role-player in the global fight against these pandemics,” defends Vanessa López.

The Global Fund had set a goal of raising 13 billion dollars for the 2017-2019 period. Following the September Replenishment Conference which Spain attended without committing any sum, it reached 12.9 billion.  “In spite of the fact that 13 billion is not enough for the reality of these pandemics, only the 100 million that everyone, even the Partido Popular, is asking the Government for are missing,” says Vanessa López.

The latest report by UN-AIDS, the UN agency that works to fight AIDS, estimated the number of people living with HIV at 36.7 million and calculated that 1.1 people died from AIDS-related illnesses last year. Despite these alarming figures, progress in the area of treatment access has been significant with 18.2 million people (49%) now accessing anti-retroviral therapy.

However, there continue to be important challenges to seeing the end of AIDS as a pandemic by 2030, the goal marked by the Sustainable Development Goals (SDG) signed by the 192 United Nations countries last year. The large number of people who lack access to treatment, the rise of new infections in mid-income countries faced with the withdrawal of international donors, breaches of the rights of key populations (sex workers, prisoners, transsexuals, drug users, men who have sex with other men) and the need to reinforce research, especially in the area of prevention and the search for a cure, are just some of the symptoms of the lack of adequate policies and, above all, the greatest problem faced by the international community: funding.

Just when it is clear that the response to AIDS needs to be stepped up, as most international health authorities (WHO, UN-AIDS) are claiming, it seems as though funding from the most important donor countries is stagnating or dropping. Resources earmarked to fight AIDS dropped from a high of 19.6 billion dollars in 2013 to 19 million in 2015, in spite of the calculations by these authorities estimating that investments must increase to reach 26.2 billion by 2020, the year of greatest investment, to drop to 22.3 billion in 2030.

The FTT as a possible source of revenue

The Financial Transaction Tax (FTT) being negotiated nowadays by 10 European countries including Spain is a great opportunity to raise additional funds in Europe which are needed to respond to global emergencies such as climate change, poverty and major pandemics like HIV/AIDS. This tax, for which a resolution is expected on 6th December at ECOFIN, has the potential to raise 22 billion, according to calculations by the European Commission itself, and 3 billion in Spain alone.

The AIDS response could be funded up to 2030 with just 30% of those funds, as indicated in the report “Financial Transaction Tax in Europe: A Way to End AIDS”, sponsored by several organizations including Health by Right.  “Negotiations with the Ministers of Finance in the coming weeks must raise the question of the destination of the funds obtained with the tax, to turn FTT into a tool for social justice and the fight against poverty and pandemics like AIDS,” says Vanessa López.  “Furthermore, Mariano Rajoy and François Hollande committed to using part of FTT for global development and the fight against climate change back in 2014. And the German Ministry of Development, Gerd Müller, also proved to be in favour of this measure”.