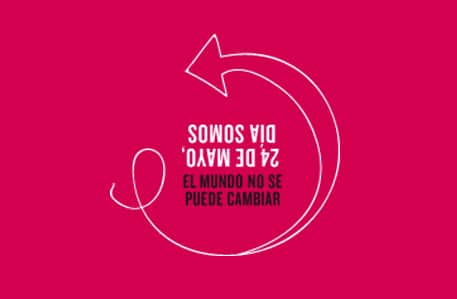 Turn the problems of the world around: Salud por Derecho invites you to participate in “Día SOMOS”

This year, Salud por Derecho has joined a large group of Spanish NGOs, organized by the Spanish Association of Fundraising, to form part of the initiative “SOMOS: Unidos para cambiar el mundo.” This campaign seeks to promote a culture of solidarity and social participation as well as to thank the 7.5 million members and donors who regularly support the non-profit sector in Spain.

The campaign will culminate with a celebration on May 24th, “Día SOMOS,” a day that has been marked in honor of those who dedicate their time, energy and resources to promoting solidarity through direct participation with an NGO.  We invite the Spanish society to join us on this day, whether at their schools, work, or out on the streets, by wearing any type of garment inside out, to show their support and to share with others why actively collaborating with an NGO is important to them.

We will be providing regular updates about the campaign on our Facebook and Twitter feeds. For more information about the SOMOS campaign, you can check out the website here.