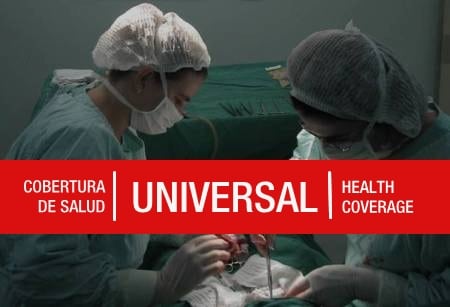 The objective of a Universal Health Coverage is not new; in 1978 there already was talk of the need to ensure primary health care in the Declaration of Alma-Ata. Today, over 30 years later, it is clear that the Declaration has been an exhibition of intentions since over 2,000 million people still do not have access to basic health services. Fortunately some international organizations such as the WHO and the ILO and some countries like France or Brazil are pushing for a reviewed concept of Universal Health Coverage, for which we are once again before the opportunity of establishing a political and operational framework which pushes the international community to adopt a mechanism that guarantees the right to health at a global level. We should also bear in mind that much of what is at stake will depend on the definition that will eventually be given to Universal Health Coverage, as well as the political will that each countries decides take in relation to health as a universal human right.

Last September, in parallel to the General Assembly of the United Nations, The Lancet magazine launched a thematic series devoted exclusively to Universal Health Coverage, launch to which Salud por Derecho was able to be present in New York. Beyond the importance of the special publication contents, with articles written by people like David Evans of the World Health Organization (WHO) and the renowned American economist Jeffrey Sachs, the commitment to launch a series specifically on Universal Health Coverage is evidence that it has become an issue of great importance on the international agenda.

Despite the economic crisis, the deep inequalities in health and the scarce health coverage in many countries, the WHO believes that Universal Health Coverage is feasible from an economic point of view and that right now the key factor is primarily a greater political commitment devoted to this topic. In fact, in 2010 the World Health Report was specifically about the road to Universal Health Coverage. Since then, the organization has been communicating the need to address this issue. Some of the most relevant data evidenced by the WHO has been that annually 100 million people are pushed into poverty because of having to deal with service costs in health, as also that currently only eight of the 49 poorest countries in the world have the economic capacity to finance basic health services with their own domestic resources. For the WHO Universal Health Coverage means that everyone has to have some sort of basic health service guaranteed and, additionally, should have access to health without putting people at risk of falling into poverty because of having to finance it out of pocket.

The International Labour Organization (ILO) is also playing an important role in relation to how to achieve Universal Health Coverage, although it has introduced it as a key element of social protection. In 2011, the ILO published a report by an advisory group chaired by Michelle Bachelet entitled “Social Protection Floor for a Fair and Inclusive Globalization.” The report develops the concept of a social protection floor, defining it as a set of social policies that guarantee to all persons income security and access to essential social services, including access to health.

In October of this same year, the Human Rights Commission of the United Nations launched a Briefing Note requested to the special rapporteurs Olivier de Schutter and Magdalena Sepúlveda, which deals with the need to ensure minimum social protection and they propose the creation of a global fund to which all countries contribute according to their income. The document states that the creation of a social protection system is a feasible reality and it would take approximately between 2 and 6% of world GDP to achieve this. The proposed global fund would guarantee the possibility of poor countries to have a welfare system to which they currently do not have the capacity to fund only by themselves, and additionally create a system that would protect the threat to developing countries of arrival of disasters that could endanger the maintenance of such a system.

In this sense, France is one of the States at European Union level that most actively supports the idea of universal social protection, in which it positions health at a special level. This has been made clear in their positions within the G8 and the G20, as also explained by the Minister of Development Pascal Canfin during the European Development Days, held between 16 and 17 October in Brussels to which Salud por Derecho were also able to attend.

Away from all the reports that have been recently published on this subject, the central theme revolves around what is meant by Universal Health Coverage, the range of possibilities is very wide and the mechanisms of both indicators and measurement will be key. In addition, the date of compliance with the Millennium Development Goals (MDG) is just around the corner and the discussion on the framework after the MDGs has already begun. One option is to include the Universal Health Coverage as the main objective in health. Although this possibility can be a great opportunity for the Right to Health in the world, since an umbrella that is capable of having a integral vision on health, at the same time coudl jeopardize some achievements that have been possible thanks to current MDGs (such as in relation to HIV AIDS and other diseases Goal 6), since it could dilute previous commitments.

In addition to these questions, for Salud por Derecho, incorporating the concept of Universal Health Coverage in the agenda of the international community is fully related to the need to talk about health from a human rights approach. It will also be necessary to reach an international consensus to achieve a palpable and measurable Universal Health Coverage, without falling into the risk of medicalizing in excess the subject and reducing the term to a discussion only about access to health services. Additionally, Salud por Derecho believes that in order to implement Universal Health Care systems in every country, especially in low income countries, every country will have to collaborate. Although health is a policy which should be confronted nationally and conscious that one size fits all policies do not work, it is necessary to advance to a global framework which recognizes the international responsibilities in which every country contributes in accordance to their capabilities, to make sure every person has their basic health services guaranteed. If the current concept is maintained, in which each country in Africa or Asia has to attend to themselves and international aid, volatile and insufficient, adds to national resources only when the donor country is generous, we will be at the same scenario present 30 years ago.

At this time the expectations are high and we hope that the current opportunity is not lost. For now all eyes are focused on the United Nations and the resolution which will be agreed in the coming weeks in relation to Universal Health Coverage. In Salud por Derecho we will be watchful, as we believe that a new international consensus on this topic is undoubtedly key and must pass not only as an international agreement of intentions, but mainly as a conviction by all states to position health at the top of the agenda and therefore the existence of an international political will that will have the ability to create a globally shared responsibility and solidarity to make the right to health a reality in every country in the world.