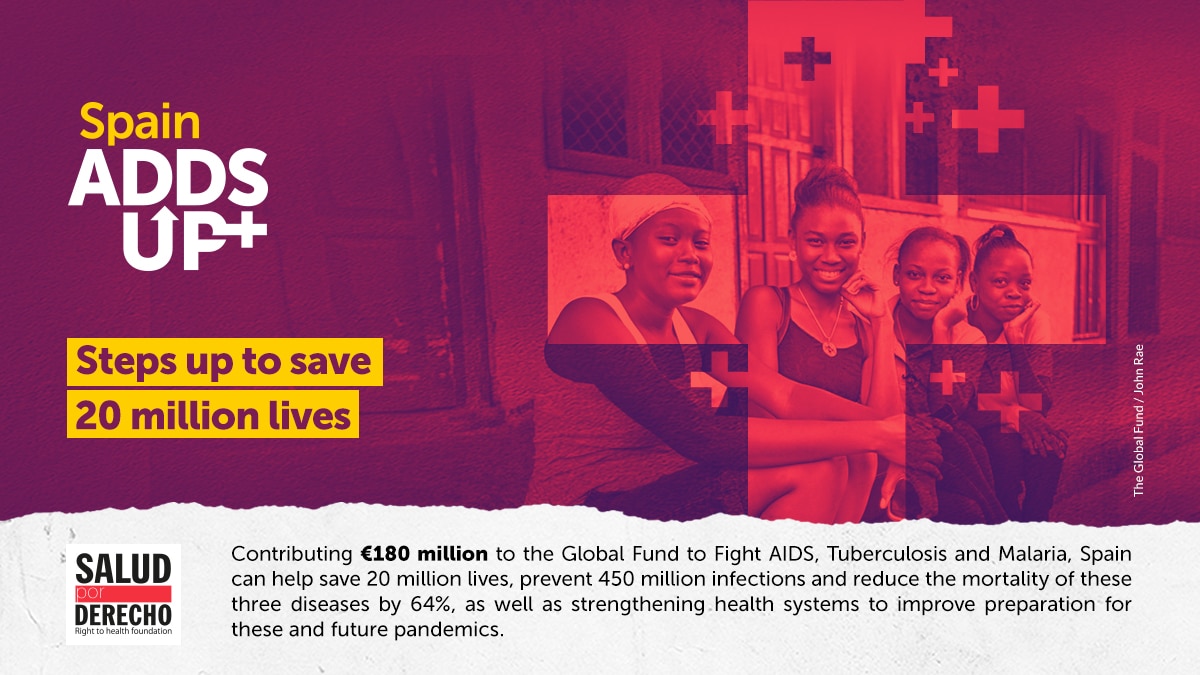 We ask the Spanish Government to step up its funding in the fight against AIDS, tuberculosis and malaria

This coming September, the Global Fund to Fight AIDS, Tuberculosis and Malaria—the largest international body fighting these pandemics—will hold a new donors’ conference in the United States, hosted by Joe Biden’s administration. At the conference, the world’s governments and others will announce their funding pledges to the agency.

The Global Fund has made a request for $18 billion (roughly €16 billion euros) over the next three years. This is an increase of 29% over the previous round of funding, which raised $14 billion, and will help address the major setbacks that Covid-19 and underfunding have caused in the fight against AIDS, TB and malaria. According to the agency’s estimates, raising this amount could save 20 million lives, reduce mortality from these diseases by 64% and prevent 450 million infections, as well as strengthen countries’ health systems and preparedness for these and other pandemics.

A contribution of €180 million

Against this backdrop, Salud por Derecho, Doctors Without Borders and CESIDA, Spain’s HIV coordinator, have sent a letter to the President of the Government, Pedro Sánchez, requesting a new commitment from Spain to the Global Fund.

The undersigned organisations ask the Government to pledge a contribution of €180 million for the three-year period from 2023 to 2025, thus establishing a trajectory of increasing contributions—Spain contributed €100 million in the previous round of funding—bringing our country closer to the contribution level of other European donors. In any event, the contribution should not fall below a figure proportional to the 29% increase in the Global Fund’s needs for those three years.

Countries like United States and Germany have already announced their contributions in recent weeks. The Biden administration has announced a pledge of $6 billion, while the German government has confirmed a contribution of €1.2 billion. Italy and France have not yet made their announcements, but they pledged €177 million and €1.43 billion euros respectively at the last donors’ conference.

The impact of Covid-19 in the fight against pandemics

AIDS, tuberculosis and malaria continue to cause around 3 million deaths per year and eliminating these pandemics as public health issues by 2030 is one of the Sustainable Development Goals. There has been tremendous progress in recent decades, however, lack of international funding and the outbreak of Covid-19 are pushing that goal further away.

“The global crisis has weakened the work being done to address these pandemics and has jeopardised the progress made in recent years”, the letter says. “It has also exposed the fragility of health systems and the essential role that formal and community systems have in preventing, detecting and responding to pandemic-prone diseases”.

The Global Fund—which provides 25% of all international funding for HIV programmes, 75% for tuberculosis and 56% for malaria—referenced this problem in its latest results report. For example, it found a 22% drop in HIV testing compared to 2019 and an 11% decrease in prevention services, particularly for key populations at higher risk of infection: adolescent girls and women, men who have sex with men, transgender people, people in prison and drug users.

The situation for tuberculosis is similar: the number of deaths increased in 2020, for the first time in more than ten years. The number of people on treatment in the countries where the Global Fund operates has also declined compared to 2019: 18% for normal TB; 19% for drug-resistant TB and 37% for extensively drug-resistant TB.

“This is why the Global Fund’s projected funding needs for 2023-2025 have increased”, the letter reminds us. Thus, argue the organisations, “it is essential that Spain continues and increases its commitment”, supporting programmes that will strengthen national health systems and have a focus on gender equality, human rights and empowerment of the most vulnerable groups, and demonstrating that “Spain is living up to its international responsibility for global health”.

Since the Global Fund’s creation in 2002, it has saved 44 million lives and reduced deaths from the three diseases by 40%, investing about a quarter of its annual budget ($1 billion) to strengthen health systems in those countries where it works. “In the face of the catastrophic impact of Covid-19 on the fight against HIV, TB and malaria, the choice is stark: we either increase funding, or we abandon hope of finally defeating these epidemics by 2030”, said Peter Sands, executive director of the Global Fund, a few weeks ago.

In addition, Salud por Derecho has launched the online campaign Spain, Sigue y suma (Spain, onward and upward) to increase the pressure on social media to remind the Government of the importance of the Global Fund and making sure that it is properly funded to continue the fight against pandemics.

Can you help us achieve our goal?

If you also think it is important, download the images here and use them on your social media. 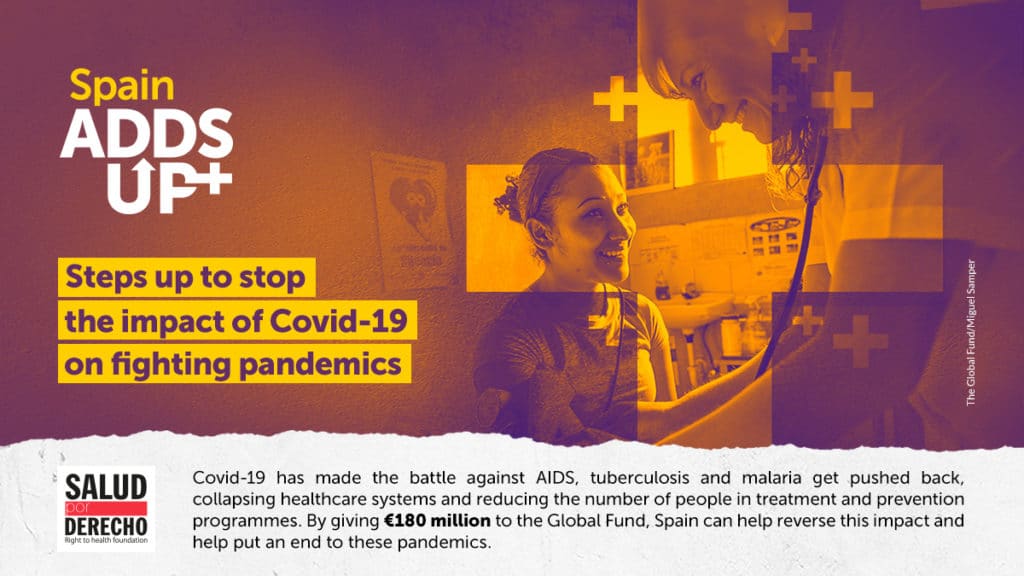 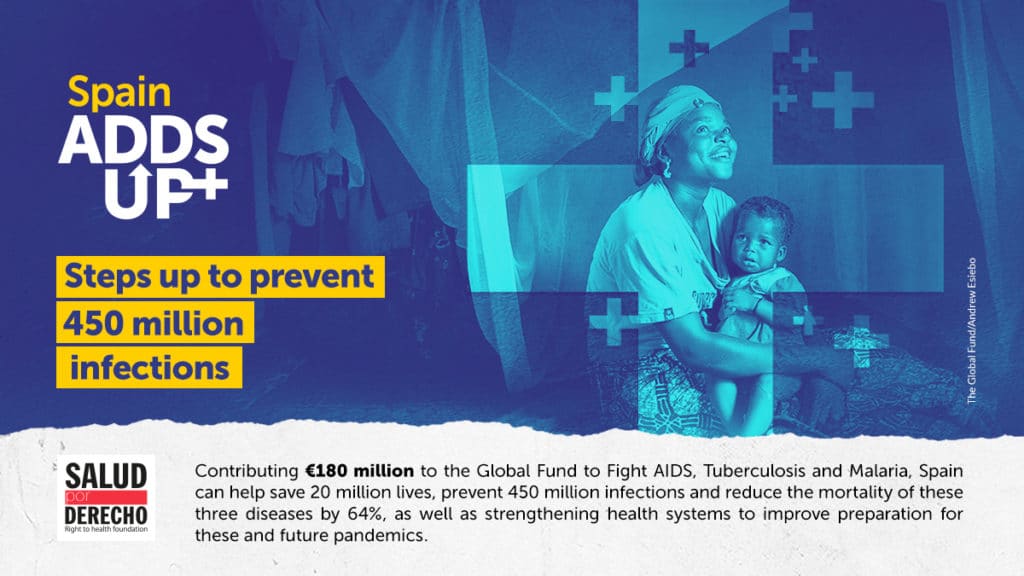