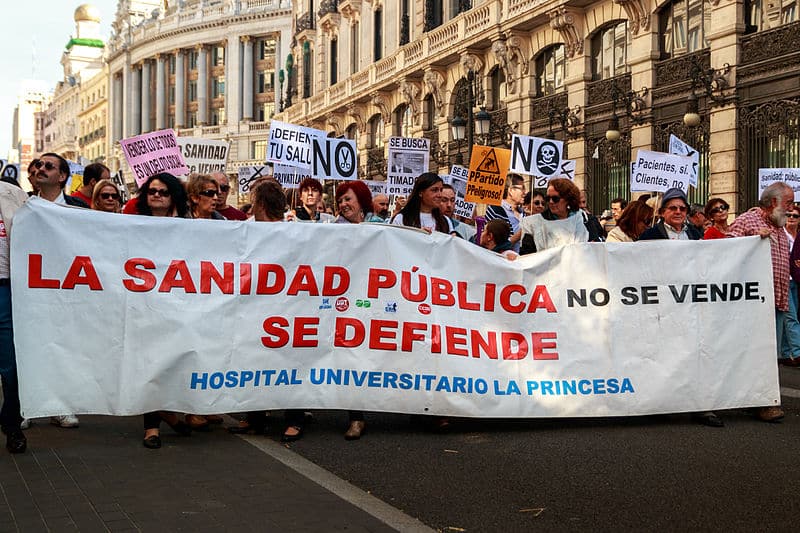 We demand an increase in healthcare spending of 1,000 euros per person per year to safeguard the Spanish National Health System

The crisis unleashed by COVID-19 has exposed the weaknesses in our health system, which has been undermined by the policies of the last decade, marked by a steady decline in public funding for health care and the rise of privatisation. According to Eurostat data for 2018, Spain currently has one of the lowest health costs per inhabitant in the Eurozone, at 1,667 euros per person compared to the European Union average of 2,660 euros, which has resulted in a significant reduction in the public health network’s resources.

In light of this situation, expert organisations like semFYC, Médicos del Mundo, Salud por Derecho, and FADSP, as well as several other organisations and unions, some of which have also been invited to participate in Congress’s Commission for Reconstruction, have delivered 12 recommendations to the members of the Commission. The organisations stress that we are at a critical moment that urgently requires measures that strengthen the National Health System in anticipation of a possible resurgence, as well as possible future pandemics, or simply for routine doctor’s appointments.

One of the most glaring consequences of the cutback policy the administration has pursued in recent years, which has been exacerbated by the recent crisis, is the shortage of hospital beds, currently numbering between 50,000 and 70,000. Also of note is the job precariousness with which health professionals (in medicine, nursing, administration and social work), who have been reporting on their working conditions for years in vain and have made an unprecedented effort during the pandemic. This health crisis has also revealed major coordination issues between the different actors and areas of responsibility in healthcare management and between the health system and the social services system, which need to be corrected as soon as possible.

Prevention is built on a daily basis

Administrations are responsible for preventing potential collapses in the face of situations like the one we have experienced. But prevention is built on a daily basis by strengthening primary care, which is undervalued and under-resourced, as well as a social system that is supportive and inclusive. One of the lessons learned from this traumatic experience is that there is an inextricable link between individual and community health. Therefore, it is imperative that the protection system includes everybody who lives in the region, particularly the most vulnerable, without discrimination and leaving no one behind.

This requires a healthcare system with universal coverage and an extensive network of social services that have an impact on the social determinants of health (circumstances in which people are born, grow up, work, live and age), guaranteeing all people decent living conditions, the most effective form of prevention against illness. If there is one thing this crisis has made clear, it is our strength as a society that champions the Spanish National Health System as the protector of our health.

Given these shortcomings of the National Health System, we urge all political parties to rise to the challenge of this reconstruction process. To this end, we recommend: