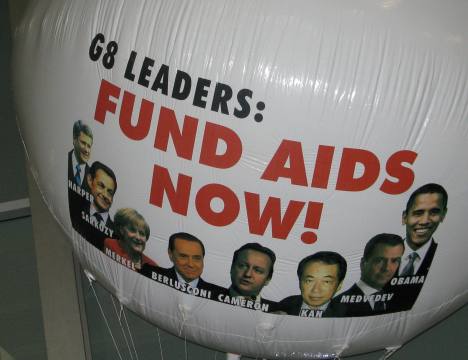 Ten days before the 1st of December, World AIDS Day, the Global Fund (GF) announced the cancellation of its Round 11 call for proposals. For the first time in its history, the GF was forced to take such a decision due to the lack of funds. This means there will be no further calls for proposals until 2014. Although a transitory mechanism has been established in order to ensure funding to treat all those who currently receive their treatment from the GF, there will be no further funding to put anyone else new either on treatment or prevention programs. Another measure that the GF was forced to take was to remove G-20 countries from the list of recipient countries, leaving those such as China, Russia, and Argentina, which had been receiving funding to care for the Most At Risk Populations (MARPS) unattended by those governments and whose treatment is now jeopardised. The good news is that China has announced that it will defray the cost of all the programmes that have been running in the country.

Given the severity of the GF announcement, on World AIDS Day, the media echoed that a sustainable response to the pandemic in the medium term would be difficult in the face of a lack of funds. In Spain, newspapers such as El País, El Mundo and ABC placed the accent on the risk of reversing progress made so far. All of the media expressly mentioned Spain as a case of great concern since in 2010 it cut its contribution back by fifty per cent and in 2011 it did not pledge a single euro. Furthermore, El Mundo and ABC quoted Salud por Derecho in its call upon the new government to turn this situation around as soon as possible. Spain’s ending the year having made a zero contribution to the Global Fund, when the country had put up 200 million euros just two years ago only makes matters worse. Worldwide funding to combat AIDS has experienced nearly a 10% percent international decline, though Spain’s 100% cutback is particularly alarming.

A Global Call to Action

As we explained to the newly elected Prime Minister, Mr. Mariano Rajoy, in an open letter published on the 1st of December in several national newspapers, scientific evidence has shown that by using treatment as a preventive measure, not only lives can lives be saved, but the number of new infections can be reduced and prevented, placing us closer to our goal of some day attaining zero new infections and therefore coming closer to a world without AIDS.

In order to press forward in this direction, together with other members of civil society, we are participating in a  “Global call to action” for donors to disburse their pledges as soon as possible so that the Secretariat of the Global Fund can put a new round in place as soon as possible. We are also calling for an urgent new donor conference to obtain the additional funding needed to be able to put extra people on treatment. The more organisations that sign the call to action, the greater the pressure will be. More than 150 have signed already. If you would also like to sign, please click here.