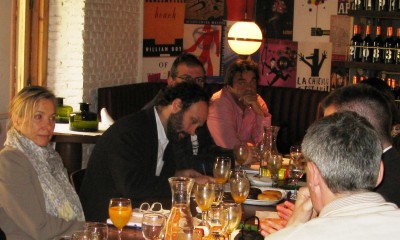 As a part of the Catalytic project, Salud por Derecho convened yesterday the first expert meeting to discuss the biomedical innovation model in Spain. Researchers from various disciplines and research centers such as Center of Molecular Biology “Severo Ochoa” (CBM), the Cajal Institute, and the Health Research Institute of the Hospital Gregorio Marañón (IiSGM), attended the event which was held in the Ateneo restaurant of Madrid.

The meeting took place in a relaxed atmosphere that allowed for an ongoing debate on various issues. There was a discussion about which actors are involved in establishing the priorities for health research and what role they play, the benefits and limitations associated with the current system of health innovation for researchers and society, and on the viability of alternative models to the current intellectual property regime, among other topics. The discussion reflected the various feelings and views of the researchers, of which Salud por Derecho took good note.

The Catalytic project will include more expert sessions such as the ones to be held in Barcelona and Brussels as well as new meetings in Madrid. With these collected views, Salud por Derecho will prepare a document that will be used in dialogue with those responsible for science and innovation policy among the Spanish and European authorities. The next expert meeting will be held in a few weeks in Barcelona.