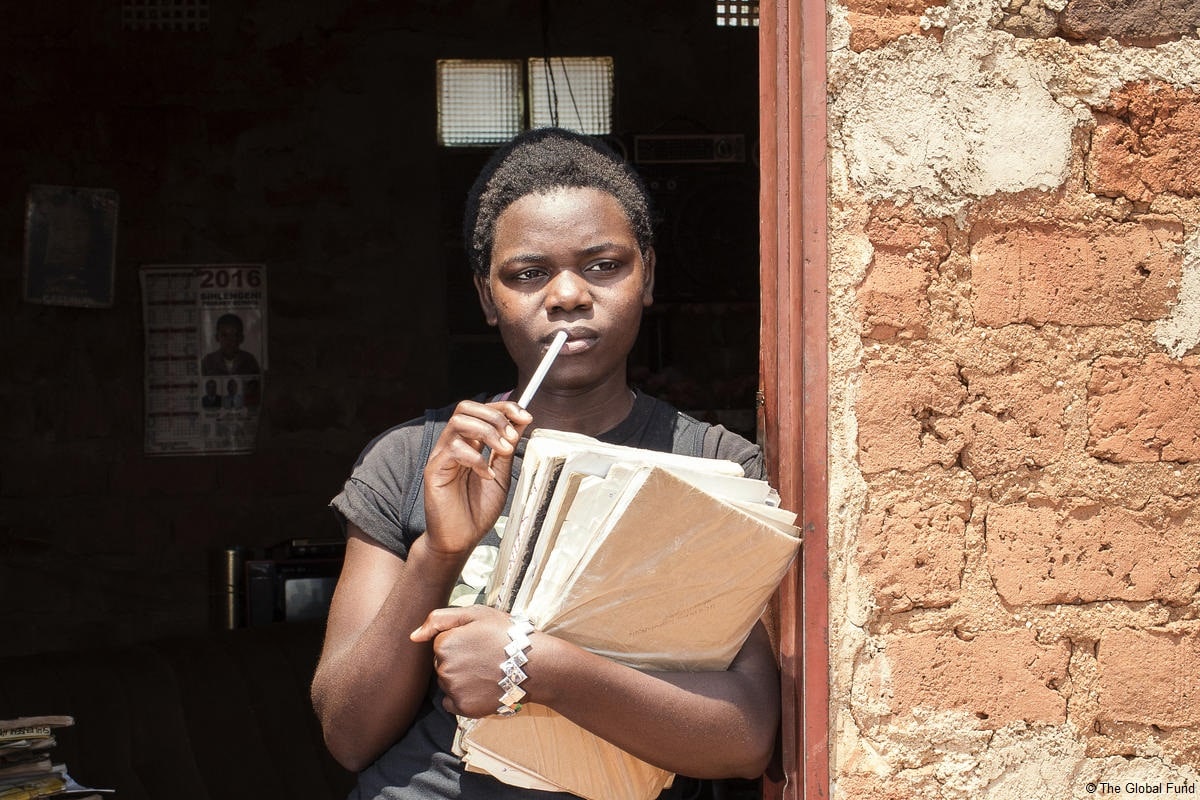 Covid-19 and HIV: teenage girls and young women, even more exposed to AIDS

In recent decades, advances made to fight HIV have been more than impressive, despite the fact that in the most recent years, the international community is more distant from ending the AIDS pandemic by 2030, as set out by the Sustainable Development Goals signed by the United Nations in 2015.

To the still many present challenges to achieve this goal, we can add the onset of Covid-19. The effects this pandemic could cause in low- and medium-income countries round the world could be devastating. The disruption to people having access to therapy and prevention programmes could entail a setback of years in the fight against HIV/AIDS and other pandemics, like tuberculosis and malaria.

Restrictions on movement have caused the provision of services to shrink and even stop completely, particularly for the most vulnerable populations. Nearly 20% of the countries where the Global Fund works are suffering from high or very high levels of interruptions to HIV-related services. Recent studies by the WHO and UNAIDS estimate that a complete six-month void in providing HIV treatment could cause over 500,000 additional deaths from AIDS-related diseases. In Sub-Saharan Africa, for example, deaths could double in the next 12 months, reversing over a decade of progress.

Due to the closure of schools and confinement measures, teenage girls and young women are coping with huge obstacles to access health services, and they are even more exposed to risks of being victims of gender violence, getting pregnant and becoming infected with HIV. There are cases like that of Melissa, 17 years old, forced to leave her studies and work to help her family. Like another five million girls who cannot go back to school due to closures related to COVID-19.

Before the onset of Covid-19, young women were already much more exposed to the virus: every week, some 5500 young women from 15 to 24 years old were infected with HIV. In Sub-Saharan Africa, concretely, five of every six new infections among 15-to-19-year-olds are girls. Young women have double the probability of living with HIV as men.

Diagnoses are also being affected by the pandemic: the results of the Global Fund’s Covid-19 tracking tool suggest that there has been a 50% drop in the volume of HIV tests in some places, which could cause an increase in new infections.

Further, confinements and the closing of borders are affecting both the production and distribution of drugs, which could cause costs to rise and involve supply problems. Estimates deem that the end cost of drugs exported from India could increase by 10 to 25% of their normal price.

The Global Fund to Fight AIDS, Tuberculosis and Malaria, created in 2002, during the harshest years of HIV, is the largest international organisation fighting pandemics. With a human rights focus, it works for gender equality, with programmes aimed at eliminating the enormous obstacles preventing women and teenage girls from accessing health services, which include inequality and gender violence. The Global Fund’s strategy also aims to strengthen countries’ healthcare systems and pave the way towards universal health coverage, both essential for being able to combat pandemics.

Today, it collects and invests some 4000 million dollars a year – 95% from governments and 5% from private donors – to support health programmes administered by local experts in the communities and in over 100 countries affected by AIDS, tuberculosis and malaria. For HIV alone, it provides 21% of international funding, providing treatment to over 20 million people.

After the onset of Covid-19, it has taken decisive action, playing a fundamental role in the poorest and most vulnerable countries. In April, the Global Fund launched the COVID-19 Response Mechanism, with initial additional funding of 500 million dollars. Today, it has already spent 812.2 million dollars to support Covid-19 responses in 107 countries and in 14 multinational programmes.

The Fund’s available resources ran out in September and it needs funds to keep supporting countries and their adaptation of programmes for HIV, tuberculosis and malaria to mitigate the impact of Covid-19 and safeguard decades of progress. To this end, the Fund is working with donors and partners to urgently raise another 5000 million dollars. This is the only way to keep saving lives and protecting the teenage girls and young women who are most exposed to HIV.

With enough funding, the Global Fund can help reinforce healthcare systems so they don’t collapse, supporting urgent improvements, including the supply chain, laboratory networks and community response systems. It also plans to protect health workers on the front line by supplying personal protective equipment (PPEs) and training them, including community health workers, and combating Covid-19 by supporting control and containment actions, including tests, contact-tracing and isolation support, communications and treatment (as therapeutics become available).

SPAIN AND THE FIGHT AGAINST AIDS AND COVID-19

In September 2019, during the United Nations General Assembly, Spanish Prime Minister Pedro Sánchez announced Spain’s return to the Global Fund, to which it had not contributed financially since 2010. The commitment: 100 million euros over the next three years. A commitment that was made official during the 2019 Replenishment Conference, at which the Global Fund raised the most funds in its history for global health: 14,000 million dollars.

Despite its long absence, Spain was a historic partner of the Global Fund. Between 2003 and 2010 it invested 724 million dollars, positioning it among the 10 main donors, along with G7 countries. Today, it is the 12th largest public donor in accumulated terms and participates in decision-making as a Board member.

In April, Spain also joined the international alliance ACT-A for accelerating development, production and equitable access to COVID-19 tests, treatment and vaccines, via the contribution of 125 million euros: 50 for the Vaccine Alliance (GAVI) and 75 for the Coalition for Epidemic Preparedness Innovations (CEPI). However, they are still short of funds: ACT-A needs 38,000 million dollars in the next 12 months, of which it has raised less than 5000 million.

You can expand the information on the current HIV situation and pending challenges in our new document ‘The impact of Covid-19 in the fight against AIDS‘ (in Spanish). 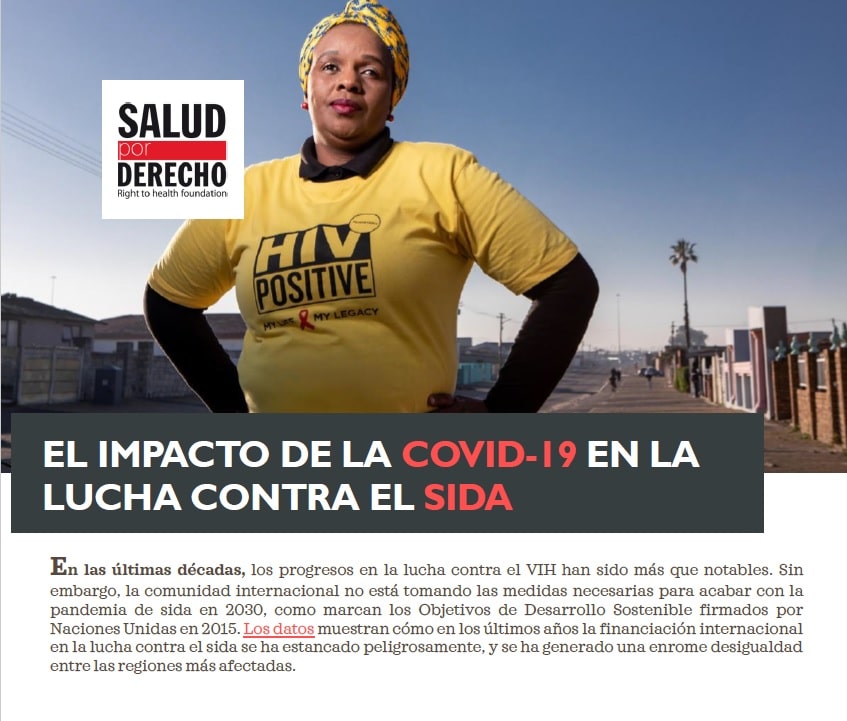