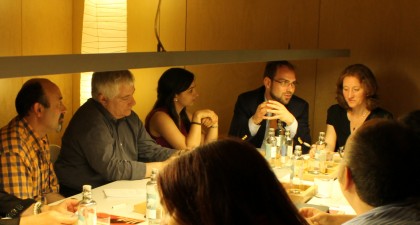 David Stuckler, researcher and expert in the economics of health, is touring Spain to promote his book which he co-authored with epidemiologist Sanjay Basu, “The Body Economic: Why Austerity Kills” (Taurus). During his stay in Madrid, Stuckler organized a small closed-door meeting with a few organizations that work for the right to health. Apart from Salud por Derecho, there were representatives from Coordinadora Antiprivatización de Madrid (CAS)[Anti-privatization Coordinator of Madrid], the Institute of Economics and Self-management, Yo Si Sanidad, and the 15M Economic Assembly Group.

During the meeting Stuckler emphasized the fact that economic crises themselves are neutral in relation to health – as demonstrated by the evidence shown in the aftermath of consequences following the 1920s Great Depression in the United States or, more recently, the case of Iceland. The social consequences of the crisis are directly related to political decisions taken, claimed Stuckler. In Europe specifically, cutbacks made in health in some countries are having a devastating social impact like in Greece, for example, where cutbacks of 50% of syringe programs has doubled the cases of HIV in the country. At the same time, the government denies that the increase in HIV/Aids is due to austerity measures and blames the situation on other social factors. In any case, the regulation of illnesses such as HIV or Tuberculosis is much more difficult and costly than their prevention, making such economic cutbacks counterproductive.

In terms of Spain, Stuckler affirmed that the austerity measures taken are not credible since the country’s debt has only increased since 2011. His approach on the matter is that crises are just a way for elites to reduce the role of the State and therefore austerity is a question of ideology. The author does not understand how a State can cut back on something like health since it is an investment meant to protect the most valuable asset that a country has, its people, who are also an essential resource for stimulating the economy.

According to the data presented by Stuckler and Basu, currently in Spain there are 180,000 people, belonging to the fifth poorest part of the country, that have a hard time accessing health assistance. In addition, they assert that unemployment in Spain should already be considered a pandemic that has provoked an increase in suicides and cardiovascular health problems. In countries where unemployment was managed correctly, like Sweden and Finland for example, during the crisis they experienced more than a decade ago, they were able to avoid the adverse consequences of unemployment.

In conclusion, Stuckler affirmed that if austerity measures were treated like a clinical trial they would have been stopped a while ago due to its serious consequences. His final advice at the end of the meeting was merely a simple message that we should transmit to our representatives: “Do no harm”.