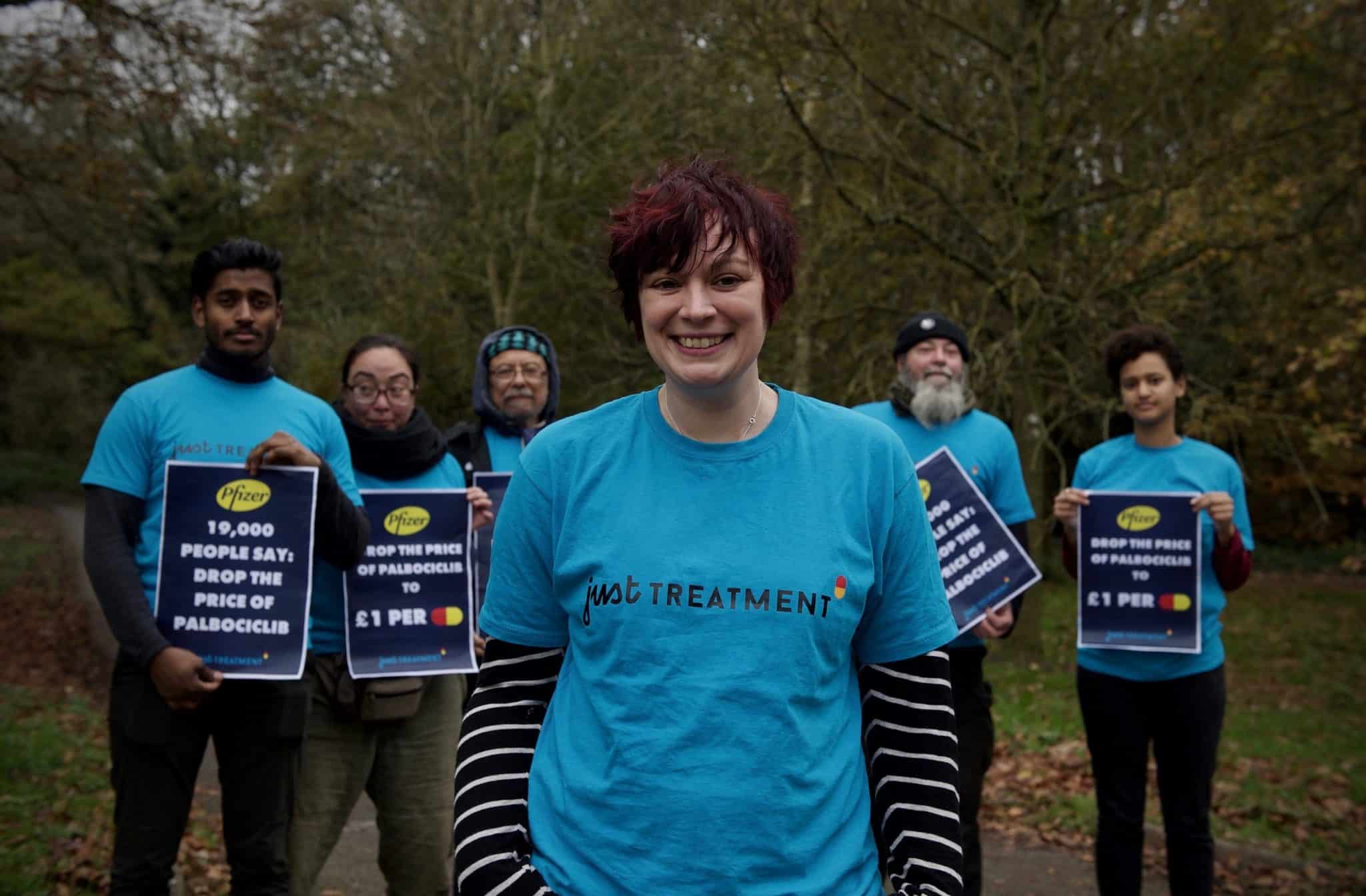 Emma Robertson is an activist and patient of breast cancer who, along the NGO Just Treatment, has been advocating for access to medicines and transparency in the R&D system. It all began almost two years ago with palbociclib, a drug that for a long time the National Health System of the United Kingdom (NHS) could not offer because of its high price.

At the end of 2017, after months of campaigning and pressure, Pfizer, the pharmaceutical company that sells the drug, agreed to reduce the price, although the agreement was secret and to date the exact figures that the NHS pays for it are unknown. The drug is finally being offered, although there are still many limitations and not everyone who needs it can receive it.

Emma, treatment with palbociclib makes you feel very well, more active, healthier, but you said that not every person in your situation can have access to it.

Yes, I’ve been taking that medication for over a year now, with very good results. I get the medication through the NHS, but it was not offered when I was first diagnosed with breast cancer. But actually it’s been made available and approved as a first line drug. This means that if I were to go to my oncologist now as a patient and ask for that medication, I wouldn’t be eligible for it, because I’ve already had other two lines of treatment since my diagnosis.

I was able to get Palbociclib because my consultant was clever and used the vagueness of the wording that Pfizer had given for their free trial conditions. My consultant said this was my first line hormone treatment because my previous treatments had been chemotherapies.

So… the lack of access it’s not related with the price?

Yes, it comes back to price because they use any excuse that they can find not to make available the treatment if is that expensive.

How much it cost?

I don’t know, because of the lack of transparency in the UK over prices. We don’t get bills as patients. I think, before the price reduction, the estimation was around 150 pounds a pill, and I take a pill a day for 21 days of the month. Only one week off.

And you know the cost of production?

Less than a pound.

It’s a huge difference. How is this possible?

Well… when we went to Pfizer’s head offices in UK we saw a fantastic and lovely glass building, security at the end of the driveway, and a big carpark for the very expensive vehicles owned by all the people working there. So, somebody, somewhere, it’s enjoying the benefits. [Laughs]

The disparity between the pound that the pill costs and the 150 pounds that Pfizer charged or the price charges now has not been adequately accounted for, and we should ask for more transparency on that. Particularly when the price had prevent or is preventing access to large groups of people who should be able to benefit from that drug like I have.

How long have you been an activist?

I guess I was really plunged into this with this palbociclib campaign, over two years ago now.

And what are your petitions to the industry and to your government?

Transparency, transparency and transparency. As a patient, and I think I speak for a lot of other patients, I don’t want to be kept in the dark about how medications are developed, how much it cost to bring this medications into the market, the agreed prices in the negotiations, what are the side effects… all this stuff needs to be out and public. I don’t want our concerns brushed under the carpet, which is what always seems to be happening.

For metastatic breast cancer, how long we get to live with this disease it’s very much dictated by how many medications we can access. We keep hearing from oncologist and medic professionals that there is no problem with access to medicines, when actually I know that I’m going to get to a point where I’m told that there is no more treatment that the NHS can offer me… This two statements don’t make sense together. There is a gap there.

About the immunotherapy and the new CAR-T treatments… there is something in the pipeline for breast cancer?

Well… Immunotherapy has been a kind of big dream for metastatic breast cancer for a while now. For the moment has been research for people with triple negative breast cancer, which is very difficult to treat and could be a very aggressive and quick. The hope is that CAR-T therapies will be available for different types of cancer, but it seems that is going to be a long way off for breast cancer.