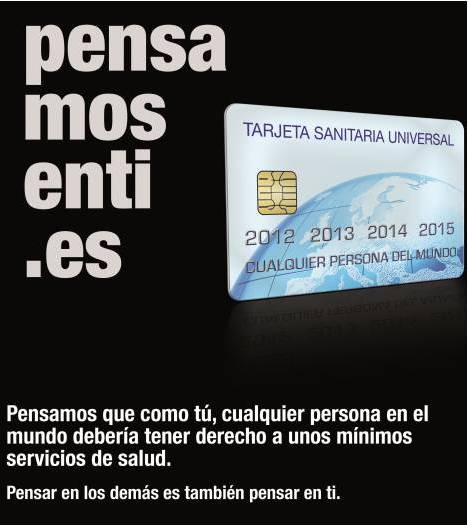 Several weeks ago, the Fundación Salud por Derecho launched its “Thinking About You”campaign (www.thinkingaboutyou.org).  Its primary objective, both within society as well as with the politicians responsible, is to begin to penetrate and strengthen the idea that it is necessary to develop Universal Health Insurance for middle and low income countries that enables all human beings, irrespective of their place of residence or level of income, the access to a minimum and basic package of health services.  The newspaper El Mundo echoes this news in its digital edition (http://www.elmundo.es/elmundo/2012/04/19/solidaridad/1334826787.html). However, when we began our campaign we could not have imagined that, almost in that very moment, the right to health in our own country was beginning to be put in question in such a clear and unjust manner.

On April 15th, the Council of Ministers approved a package of cost-saving measures in the health system, the dimensions and social significance of which will be known little by little.  One of these measures is the withdrawal, beginning in August, of the health insurance card of all those immigrants that find themselves in an undocumented situation. The Administration says that it will negotiate agreements with NGOs, which have already experienced drastic reductions in grants and the majority of which offer assistance through their volunteer base which does not have an obligation to offer certain types of medical assistance. As such, health personnel that work in public health will be left to attend only those that pay.  Citizens, Spanish or not, in a documented situation in Spain will also have difficulties accessing health attention if they have never contributed to social security.

Distinct sectors have been analyzing the measures put in place and the preliminary conclusions seem clear: we are not facing contextual measures which have the aim to cut the public deficit as ordered by the European Union; rather, it is a much more profound change, a change of model, through which it is possible to catch a glimpse of a new system of social security and health care in which only those who are insured have access.  In such a system, it is not sufficient to reside in Spain or be a Spanish citizen.

As Fundación Salud por Derecho, we have always defended that health is an indispensable foundation on which the development of individuals, communities and populations is built and we fight so that the right to health is universal, so that the social and economic inequalities that two-thirds of humanity suffer are reduced. We fight so that, by overcoming a will-based model, we can construct a future based on a shared global responsibility.

But an organization like ours cannot look the other way when the right to health is placed in jeopardy in our own country, eliminating the social security of thousands of people. Perhaps, since the beginning of the economic crisis, we could sense something like this would happen, but we certainly did not expect it to be this profound. The budget reduction measures, adopted by the executive branch of Mr. Rajoy, are unnecessary, unjust and immoral. They are unnecessary because there are other measures that could have been more effective, such as taxing financial transactions, effectively fighting against tax fraud, advocating a better and more coherent realignment of the competencies of the administration and budget priorities, introducing measures for increasing efficiency, and so forth. They are immoral because they discriminate against the most vulnerable and because they threaten an essential condition of all people: their dignity, their right to demand to be treated like their fellow human beings.