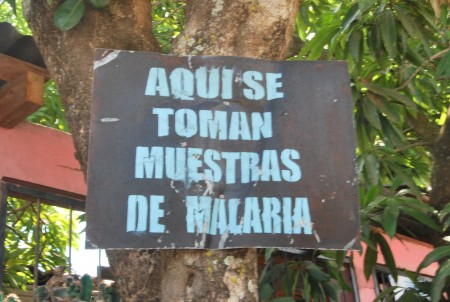 Helping in the Community to Combat Malaria

In Juticalpa, Olancho province, Honduras, the Town Hall created a network of volunteers to fight malaria in the area. In one of the communities that participates in this initiative, Miriam Guadalupe, is one of the volunteers we met who works to try to facilitate the detection and treatment of the disease.

Miriam tells us that eight years ago she suffered from malaria. At that time she had to go to the health center that was outside of their community to be able to take the test, and then return in order to receive the treatment. Today, she is actively involved as a volunteer in the “Network of Field Assistants” which belongs to the National Program for the Prevention and Control of Malaria, a program that aims to improve the detection and the assistance of people with malaria.

Thanks to Miriam’s contribution, people in her community that suffer from malaria only have to go to her house in order to get the quick malaria test because her home is now registered as  a “voluntary collaborator”. Miriam is also responsible for directing the sample to the health center and then through telephone they communicate the results. Miriam stresses that the great advantage of this system of voluntary work is that it is no longer necessary for people who believe they have malaria to travel all the way to the health center. In addition, to be a neighbor of the community and the fact that they know her, encourages people to be tested on the slightest suspicion.

With this network system not only has malaria been detected with greater ease, but treatment has improved greatly. In the case of Miriam’s community, those who obtain positive results only have to go to her home so that she will be able to give out the treatment pills which cures a person from malaria in 14 days.

The network of field assistants is working very well in the region of Olancho. The mayor of Juticalpa has implemented a system that has been called “Ecosystem Forum”, in which the mayor’s office, civil society, private companies and NGOS work together to combat malaria in the region. In addition to the implementation of voluntary collaborator jobs, the program also helps homes to be better prepared to prevent malaria.

Thanks to the program, cases of malaria have fallen dramatically in Juticalpa, from 1189 cases in 2010 to 290 cases in 2012. This program is funded in part thanks to the contributions of the Global Fund to Fight Aids, Tuberculosis and Malaria.