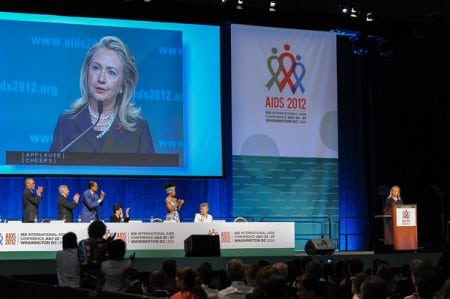 Yesterday, US Secretary of State Hillary Clinton was present at the plenary session of the International AIDS Conference. During the panel, she highlighted the need to join forces to achieve an AIDS-free generation. One of the initiatives to achieve this is preventing the transmission of the disease from mothers to their children. Clinton assured that the fight against AIDS is one of the priorities of the Obama administration, which is why the US is donating anÂ additional 80 million Â dollars to end mother-to-child transmission.

One of the panels yesterday was on the issue of public-private partnerships and the role that they can play in the fight against AIDS. This panel was moderated by the singer Elton John and attended by Elena Salgado, the Spanish Ex Minister of Economy during the government of JosĂ© Luis RodrĂ­guez Zapatero.

The ex-minister maintained that the economic crisis cannot be an excuse to cut funds in the fight against AIDS. Salgado highlighted that given the current economic panorama it is of primordial importance to allocate money in the areas where it is best used and that today accountability should understood not only as the classic concept but should be viewed as social accountability, effectively reflecting that the funds are actually getting to the most vulnerable groups. Similarly, she called on the need to adopt new forms of obtaining resources for international cooperation, such as, for example, the Tobin tax.