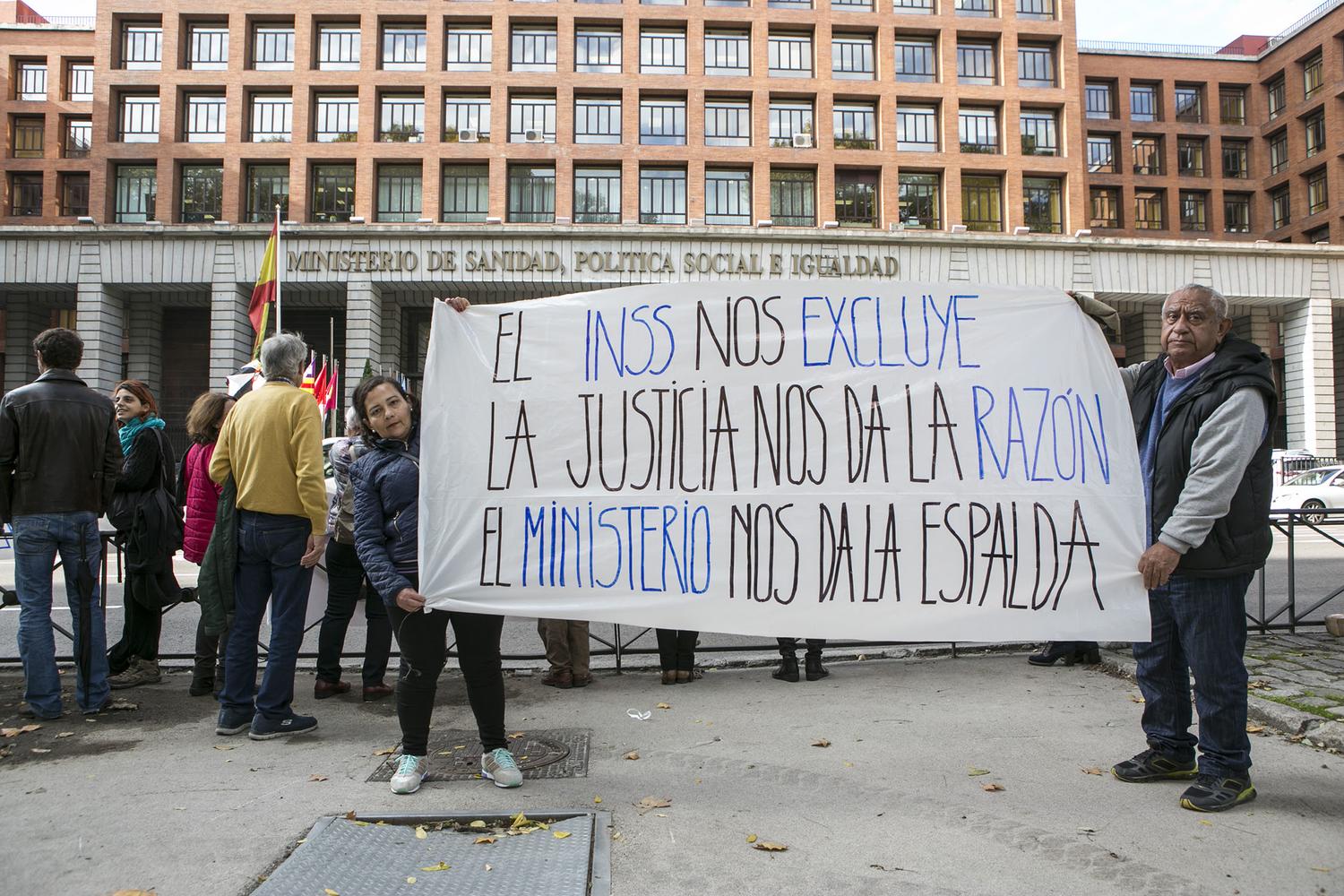 “It was announced with great fanfare that universal health had returned to spain, but it is not true”

Just a few months ago, the socialist party (PSOE) announced, with great media hype, the definitive return to Universal Health care, after years of health exclusion under the restrictive Royal Decree 16/2012 (RDL) of Partido Popular (PP). However, organizations such as Yo Sí Sanidad Universal, REDER or Amnesty International criticized, from the beginning, the lack of ambition and the misleading headline of the new RDL of Pedro Sánchez’s Government, which left many people without access to health in Spain and, in certain aspects, far from an advance, it worsened the previous RDL.

After the article published this week in eldiario.es which documented how the Government is denying access to public health to regular immigrants with cancer, we got in touch with Nacho Revuelta, a doctor and member of the Yo Sí Sanidad Universal collective, to understand a little more about the reality of the new RDL.

No. The PSOE’s RDL has brought certain positive changes but in some cases it has not addressed a real solution – and in others it has even led to a regression compared to the previous norm. It is far from achieving universality.

What are these advances?

The general advance is that, conceptually, the new RDL changes the recognition of the right to access to health and dissociates it from contributions. Health care is not paid through social contributions; it is paid through taxes. It did not make sense that being or not being a recipient of health care depended on whether a person is listed on social security. This is an advance, because conceptually it is important to recognize that there is a right directed towards the person beyond their work situation. In particular, the new RDL favors people without residence permits who prove to have more than three months in Spain, because it gives them legal coverage throughout the territory.

And those who have been in Spain for less than three months are excluded?

Yes. With the new RDL, people who have less than three months in Spain are not covered, neither those who simply cannot prove that they had expend that time in Spain using a legal local/regional register or any other type of documentation.

The problem is that, in addition to the fact that these people sometimes need urgent health care, there is no exception in the law. Something that, interestingly, did happen with the PP’s RDL with minors, emergencies or pregnant women. But PSOE has not accepted to include them as an exception and these populations are now excluded, despite the fact that international legislation protects these vulnerable groups. In this sense, the new RDL is regressive with respect to the previous one.

And there is another affected group…

The other excluded group is the one of the ascending relatives of people who reside in Spain and even have the nationality. Sick parents, for example, who lived in their countries and who, in a situation of fragility, came here with their children. It is nonsense not to treat them, since it does not suppose a relevant saving and increases the suffering of the people. And it is even crazier in the case of some serious diseases, such as cancer, because in the end you will have to treat a person in a few months but with a more advanced disease.

Why do you say that in the end they will treat them?

Because not treating them is illegal. There are more than 70 sentences ratified in autonomic Superior Courts of Justice that have given the reason to the complainants.

On what are those sentences based?

These people have a residence permit, they meet all the requirements and, therefore, they should be able to have public health assistance. That is what the Law says. The Ombudsman, in a resolution in 2014, made it clear that there is no requirement in the legislation that forces these people to contract private health insurance, as the National Institute of Social Security (INSS) is interpreting, and which is the main argument of the Administration to deny them public health care.

And those people who have reported their cases already have access to the health system?

Individually, yes. The problem is that they have to go through a period of complaint to the INSS and another judicial and complaint process that can last between six months and a year. Even more.

And after all those sentences, why does not the regulation change?

It is difficult to understand. They are losing one sentence after another, practically without difference between them. I think that there are only one or two sentences favorable to the INSS in which the judge considered that the person did not have the right to the health card. But mostly courts are giving the reason to these people. And despite being a clearly illegal practice at the discretion of the judges, the INSS has not changed its attitude.

And how is it possible that the Administration does not take into account the Law?

They have used one of those favorable judgments to raise an appeal to the Supreme Court that is now pending a sentence of cassation that, in theory, should establish jurisprudence. But it is absurd and immoral to wait for the Supreme Court to settle a single sentence against 70 to see who is right.

So, what else needs to happen for Spain to guarantee Universal Health again?

On the one hand, Sanchez’s Government should first obey the law. The judges and the Ombudsman have already told him what he has to do. The Administration must stop demanding a private insurance for family members who come to regroup. There is no need to change the law or make new rules. It would be enough to pick up a telephone and order to obey the current law. If they want to wait for the sentence of cassation, it’s OK, but in the meantime we ask them to comply with the Law and give a health card to the people who are entitled to it. What is being done now does not make any sense, apart from being illegal and immoral.

On the other hand, each autonomous community in Spain should develop the RDL in the most inclusive way possible for vulnerable groups, and offer clear and public instructions so that people know what to expect. Right now, each health center of each region can tell you something different and there is a lot of confusion.

So… regional goverments have the capacity to interpret the RDL and apply it differently.

In some way, yes. They had been doing it with the previous RDL. The Royal Decree of PP only contemplated three exceptions: minors, pregnant women and emergencies. In 2012, when that Royal Decree was approved, there was a clamor from groups and scientific societies complaining that infectious diseases, for example, could not be left out because it could become a public health problem. Some regions included some psychiatric and infectious diseases within the exceptions, and it was accepted by the Government of PP accepted and did not appeal. We arrived to a situation of coexistence between the RDL and certain regional regulations that the Government tolerated. Now, with the new RDL and with requirements such as demonstrating three months of stay, many regions have also failed to address these exceptions, especially in the case of pregnant women, minors or emergencies.

However, there are certain recommendations made by the Government to the regions for people without a residence permit.

Yes. When the problem of minors, pregnant women and people with serious illnesses that cannot postpone their medical assistance for three months was raised, the Ministry issued recommendations to the regions to open a door through social services, which through a social report can now assess those cases individually.

It does not seem enough …

These people are facing the wall of the law. It does not matter if you are pregnant, if you have to go through an interruption of pregnancy or if you are a minor and you are delaying, for example, a vaccination. They are being denied attention and cannot do anything because there is no other channel.

What the Government should do is to turn this document of recommendations into mandatory instructions for the regional authorities. Because now, being recommendations, means regional governments have no obligation to comply. In fact, almost none of them are doing it.

But regional authorities could look for those little exceptions like they did before, right?

The regional governments are not doing anything because the RDL, despite being in force, is still in the period of amendments in Parliament and they will not change all its processes and internal circuits if within three months the law changes. Now, with the upcoming national elections in April, there will be a long and important period without legislative changes, and we would have to demand the regional authorities to draw instructions and regional regulations to make clear in which scenario we are and how they should act.

What requests do you have from Yo Sí Sanidad Universal?

Our request is to all political groups so that there is a commitment to recover Universal Health in a real way. We are not going to judge anyone’s intentions, but we think there has been a lot of marketing for what this new law really means. It has been announced that Universal Health has been recovered, but it is not true. There have been some advances, of course, but other things have not been solved despite being easy: it hardly requires compliance with the law. It is curious… in 2016 the PSOE made a Non-Binding Proposal to return to the situation prior to the RDL of PP. Now, however, when they have had occasion, they have developed a law almost worse than the previous one. It is very difficult to understand.