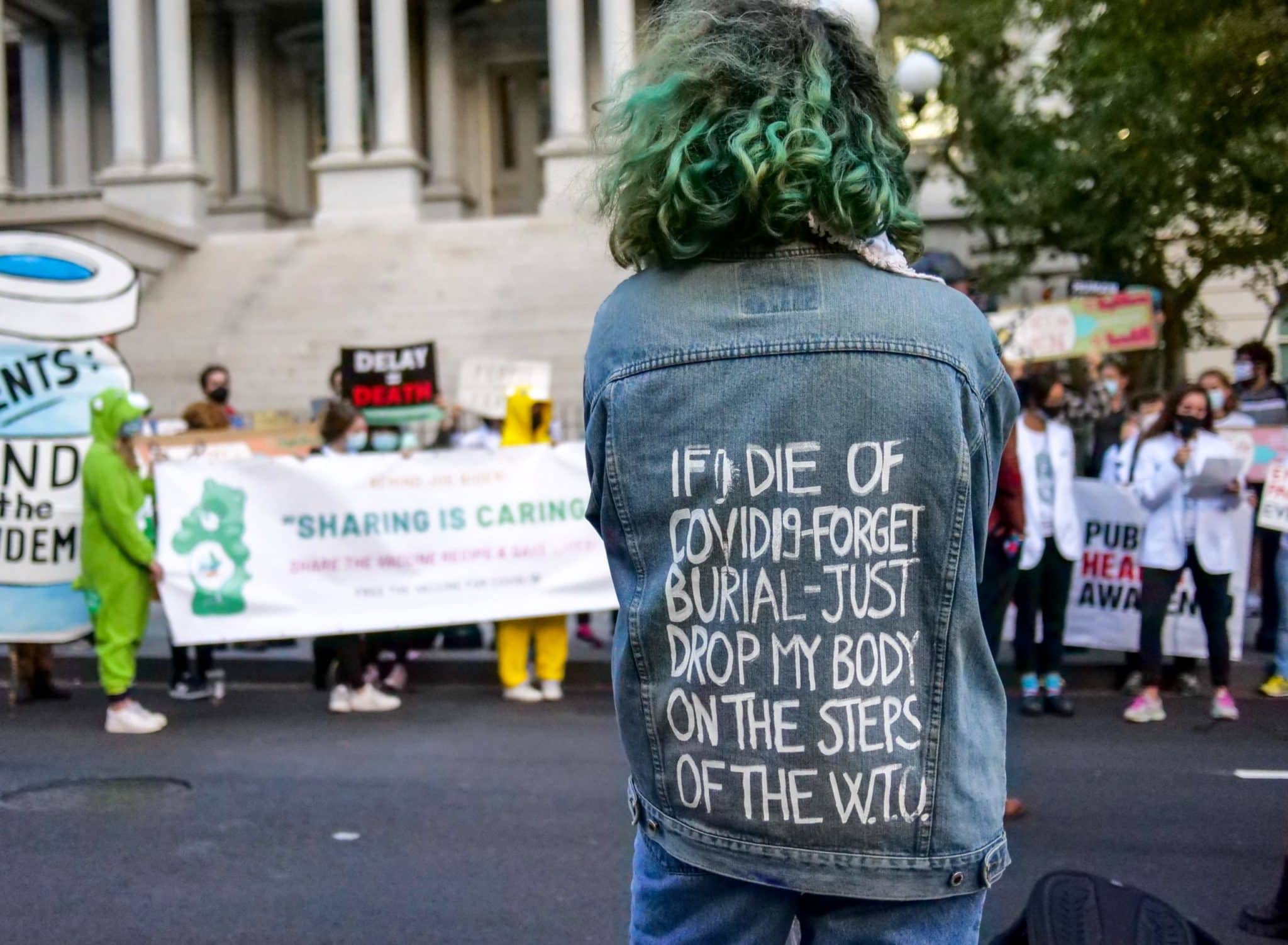 More than two years into a pandemic that has killed 15 million people, World Trade Organization intellectual property barriers shamefully remain a deadly obstruction limiting global access to COVID-19 vaccines, tests & treatments.  A few wealthy countries promoting pharmaceutical corporation interests have been able to block the use of the WTO’s waiver mechanism to temporarily suspend such barriers despite more than 100 WTO member countries supporting a waiver. The WTO’s notoriously exclusionary, oppressive processes have been deployed instead to force through a sham text that will not improve global access to COVID-19 medicines because it not only fails to remove IP obstacles but outrageously adds further constraints to existing WTO flexibilities for medicines production. This outrageous situation underscores that governments must take immediate actions to bypass the WTO’s prioritization of pharmaceutical monopolies over human lives.

By acting on behalf of pharmaceutical interests and blocking WTO removal of intellectual property (IP) barriers to global vaccines, tests, and treatment access, the European Union, Switzerland and United Kingdom have betrayed the billions of people worldwide who still need access to lifesaving vaccines, medications, and diagnostics. In failing to deliver on a vaccine waiver for which it announced support and blocking the inclusion of treatments and tests, the United States has also turned its back on a planet desperate for the COVID pandemic to end.

The failure to temporarily waive the WTO’s Agreement on Trade-Related Aspects of Intellectual Property Rights (TRIPS) as demanded by the vast majority of the world’s countries and by public health experts and health workers, generic medicine manufacturers, human rights advocates, faith leaders, labor unions, community groups, scores of Nobel laureates and former heads of state, and even the Pope spotlights just how broken and dangerously out-of-touch the WTO remains.

Health needs cannot be subservient to pharmaceutical monopoly’s profits.  In response to the ongoing failure to adopt a temporary waiver of pharmaceutical IP monopolies on COVID medical countermeasures, civil society organizations around the globe are calling on governments to:

This united call comes as the WTO concludes its most significant decision-making meeting since the start of the COVID-19 — the 12th WTO ministerial Conference — without agreeing to temporarily remove WTO IP rules that restrict the production and supply of COVID vaccines, diagnostics and therapeutics.

For roughly 20 months, the obstinance and bullying of a few very economically-powerful WTO member states was allowed to run roughshod over the wishes of more than 100 countries to waive WTO TRIPS obstacles to global access to COVID-19 medical tools. The TRIPS waiver text proposed in October 2020 by South Africa and India enjoyed cosponsorship from 65 WTO member countries, but outrageously negotiations on this text were never allowed. Under the WTO’s unacceptable processes, a text written by the WTO Secretariat and supported only by the main waiver-blocker, the European Union, was pushed forward to be railroaded through the Ministerial. History will harshly record the WTO’s contribution to COVID vaccine, treatment and test apartheid.

The WTO’s threat to global access to medicines did not start with COVID-19. For decades, the WTO has steadfastly refused to put shared global priorities like saving lives and ending pandemics ahead of the narrow profit and power-seeking interest of pharmaceutical monopolies. This was clear at the turn of the century during the peak of the HIV/AIDS crisis, and has only become even more clear with the WTO’s unconscionable inaction during the COVID crisis today.

The WTO’s draconian IP rules have already contributed to prolonging the current pandemic and, if countries can’t get these rules out of the way, they will continue to contribute to massive public health, economic and social damage during future pandemics as well. And pandemics are not the only matters of concern.  Billions of people lack access to lifesaving medicines that prevent, treat and cure illnesses because intellectual property regimes distort research priorities, create scarcity by artificially restricting supplies, and allow excessive pricing and inequitable distribution that affects the poor and people living in lower-income countries.  Countries that don’t accept these rules are subjected to trade threats and repercussions, undermining their own sovereign processes and rules.  This cannot continue.

The world must not allow the deadly vaccine apartheid that characterized the first generation of COVID vaccine manufacturing and distribution to be recreated when it comes to COVID diagnostics, treatments and second-generation vaccines.  With the WTO process failing to suspend WTO IP rules to prevent this ongoing and disastrous injustice, governments who are also WTO member states must now act in good faith outside of the WTO’s strictures.

Addendum: Actions Governments Can Take Now to Help Save Lives and End the Pandemic

(1) Pledge not to use WTO dispute resolution mechanisms, other international trade and investment agreements or any other means in an attempt to stop or dissuade countries from producing, distributing, purchasing, or using medical goods produced by alternative producers or from sharing information on how to do so outside of the WTO’s IP rules;

(2) Adopt a national security declaration under Article 73 of the TRIPS Agreement and pursuant to national laws to suspend the enforcement of all forms of IP protections on COVID-19-related medical technologies and materials;

(3) Publish technical information on how to produce the NIH/Moderna, Pfizer/BioNTech and other COVID vaccines, as well as all available data on their safety and efficacy, without waiting for the permission of the so-called IP holders to do so, and offer rewards for access to such information when it is not available;

(5) Adopt and use exceptions to test data protection and regulatory data marketing exclusivity, if needed, on COVD-19 medical technologies.  Issue compulsory licenses for manufacture, distribution (including export and import) and use, sale and purchase of COVID-19 new generation vaccines, medicines (including Paxlovid and other COVID therapeutics) and diagnostics necessary to implement effective test-and-treat programs;

(6) Cooperate with other countries in the establishment and use of a compulsory licensing facility to enable coordinated issuance of compulsory and government-use licenses and suspicion of non-patent IP on key COVID-19 medical technologies and adopt and make full use of patent opposition procedures;

(7) Help fund the creation of open-source, next-generation COVID vaccines by making grants to and placing orders with the World Health Organization’s mRNA COVID-19 Vaccine Technology Transfer Hub in South Africa and help facilitate the creation of other mRNA production facilities throughout the world, while always including contractual requirements that technologies developed by one hub and shared freely with others and that funding for these hubs does not have IP strings attached;

(10) Invest in equitable vaccine, diagnostic and therapeutic procurement and distribution programs, including prioritization of procurement from domestic and regional sources where possible.