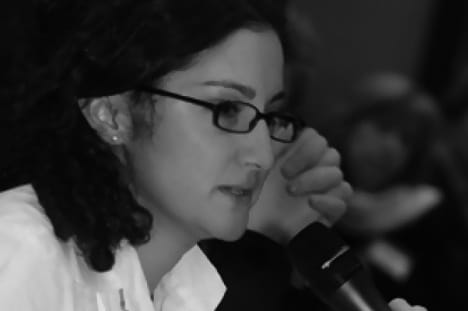 Judit Rius, who was one of the speakers attending the Conference “Challenges 2011”, is U.S. Manager of the Campaign for Access to Essential Medicines, Medecins Sans Frontieres/ Doctors Without Borders (MSF).

1. The High-Level Conference on HIV/AIDS was held in New York three weeks ago. What is your impression about the results of the Conference?

It concluded positively. The countries committed to put 15 million people in treatment by 2015 and donor countries committed to maintain the financial commitments to continue providing a joint and to coordinated global response. However, the financial commitment was very vague and the final declaration has significant weaknesses so we’re not entirely satisfied. During negotiating we missed a lot of energy dealing with issues that should not have been as controversial as they were. For example, the mention of key populations was very difficult due to the opposition of some countries to recognize the rights of some vulnerable groups. Fortunately, after intense discussions with the governments they finally are included in the final declaration.

2. What is the most positive part of that Declaration?

The most positive parts are the commitment to end with the mother to child transmission and the reference to innovative financing mechanisms that France, among others, was promoting. There was a big risk that this reference would be leaved out, due to the initial opposition of countries like the United States.

3. And the most negative part?

The most negative part is the strong reference in the text to the Intellectual Property (IPR). The declaration reflects the impact that intellectual property and patents have on the final price of the products as well as the right of countries to use the flexibilities of the Agreement on Trade-Related Intellectual Property Rights (TRIPS). However, the initial draft declaration also mentioned the negative effects the TRIPS-plus, the standards imposed by the United States and the European Commission (on behalf of the EU) to developing countries in negotiations of Free Trade Agreements, had in developed countries. However, developed countries at the end opposed to mention it in the final document and it was eliminated, which in my opinion it’s a shame.

Developing Countries are being forced to accept rules and obligations of IPR beyond what was agreed in 1995 in Doha during the TRIPS Agreement. Theses rules also restrict their political and legal options to fight against the epidemic and to try to reduce the price of drugs. A contradiction arises: on one hand, there is a commitment to put 15 million people on treatment; but it is admitted the world is in crisis and therefore more value for money is needed. However, while this is said the options for developing countries to use generic and to reduce costs in treating this epidemic are restricted. Obviously, there is an inconsistency in the arguments of the developed countries.

4. MSF has been denouncing cuts in international funding to fight HIV/AIDS during the last two years. Are you experiencing lack of funding in the centers you have in the field?

The budgets of our projects are not affected directly because we work with independent financing. However, by cooperating with the Ministries of Health and other government agencies, we have noticed, due to funding reduction from donors to the Global Fund and the budget of the President’s Emergency Plan for AIDS Relief (PEPFAR), that the number of people accessing treatment under national health programs has been restricted and, consequently, the number of people who come to our centers has increased.

MSF denounces greater and cheaper access for the poorest people to biomedical products to fight HIV/AIDS, and other diseases such as tuberculosis and Chagas. It is been said that we are entering in to “the decade of vaccines.” Are you hopeful this may imply great progresses in this area is a achieved in the coming years?

This is a very particular subject. We expect to achieve great progress as a result of the success of “replenishment” of The Global Alliance for Vaccines and Immunization (GAVI) that took place a couple of weeks ago and that raised US $ 4.3 billion dollars exceeding an initial target of US$ 3.7 billion, It therefore seems that the decade of the vaccines will be fully funded.

However, we feel critical about the way this decade of vaccines has being designed.

First of all because we believe it is necessary that same level of commitment that donors have shown with vaccines extends to other health problems. And secondly, because we have some problems in the GAVI design and with its modus operandi.

5. What are these problems?

Those problemas are: the price transparency, the conflict of interests, and the role of GAVI in reducing the price of vaccines.

There is no information about how much GAVI, UNICEF and developing countries are paying for vaccines even though one of GAVI objectives is to enable developing countries pay as less as possible for vaccines to ensure the sustainability of interventions and, the first step to achieve that, is to have price transparency. UNICEF announced, a couple of weeks ago, that it will publish the prices they pay for child vaccines so we could be talking about a change of direction in this regard.

The second problem we found in GAVI is the conflict of interests. Pharmaceutical companies are part of the Executive Board of the institution which obviously influence the decisions taken at such meetings and any measure t be taken to reduce the price of vaccines, financing them or prioritize one or another.

Finally, we believe that GAVI has not exercised sufficiently its political and trade power in reducing the price of new vaccines. This threatens the sustainability of interventions once national governments have to take care of them. GAVI should promote competition.

6. Why do you think GAVI doesn’t encourage competition and exercise their power to lower prices?

The Board of GAVI and its structure in general are too tied to the interests of pharmaceutical companies.

7. You are also participating in World Health Organization (WHO) Expert Working Group on R & D financing. At which stage is the group at the moment?

The group is in the process of accepting proposals. The studied proposals are very interesting and some of them may be the future innovation mechanism that responds to both interests: innovation but also access.

Some of the most interesting proposals are those which dissociated the cost of innovation from the final price of the product. It opens the way for new paradigms of innovation that can respond to the interests not only of those who innovate but also to patients and Governments that are financing the response to the most devastating diseases. There is also a proposal for an international biomedical treaty to regulate and manage innovation in the biomedical sector. I hope both proposals are reflected in the recommendations of the working group, and that the group also recommends to the WHO to continue advancing in these discussions.

8. Are you therefore optimistic with the conclusions that can come out from this group?

We have no guarantee of a good result but we are optimistic because, among other things, the group has been very proactive and courageous to avoid conflict of interest, one of the main problems faced by the previous group. Moreover, the fact that the concept of de-linking the cost of innovation from final price of the product appears from the beginning in the request for proposals and comments makes us feeling hopeful.