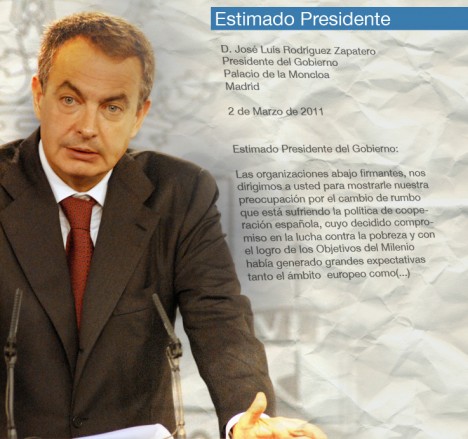 In a letter signed by more than 40 organizations, the Ministry of Uganda, two Socialist MEP together with more than 40 international organizations worldwide have urged the Spanish government to maintain its commitment to ODA, not to cut basic social services expenditure and to maintain the same level of commitment with the Global Fund to Fight AIDS, Tuberculosis and Malaria.
MEP Glenis Willmott MEP  and Michael Cashman MEP, both from the Labour Party have joined organizations from African, Europe, America, and Asia in a joint request to Spain to make the 0, 7 % objective for  2015  a binding compromise.

Apart from that, the letter remarks the high commitment that the Government of Zapatero has had in the last years in the global fight against poverty and in particular in the fight against HIV/AIDS. However the letter also points out that at the moment, that commitment is in big danger of not being releasable and therefore to harm the most impoverished people in impoverished countries.

Hence the emphasis that the signatories of this letter place on the need for Spain not to reduce aid to basic social services despite general cutbacks. This petition is in line with the request already made by the Spanish organizations working on health as well as with the request that all political groups in Parliament made during the 2011 budget discussion.
However, so far none of these requests has been heard as the budget recently approved by the Council of Ministers reflects a reduction in ODA dedicated to health and education of more than 6 and 3 points respectively.

You can red the letter here