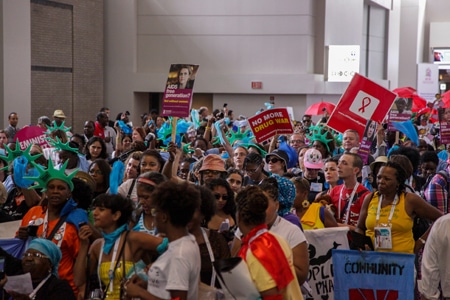 Along with other activities that Salud por Derecho is organizing during the week leading up to World AIDS Day, December 1st, 2012, the organization has developed a manifesto, entitled “United to end AIDS,” which has received the support of more than 35 organizations from different areas, including civil society and research centers throughout Spain.

To see a translated version of the Manifesto, click here.

Salud por Derecho delivered this manifesto, together with other key documents, including the 2011 UNGASS report and a briefing with concrete recommendations for the Spanish government, in a toolkit to parliamentarians, senators, and ministers in development cooperation and health in order to raise awareness and ensure that this critical issue remains a priority on the political agenda.

We have also initiated a twitter campaign, inviting policy makers, civil society, and citizens to join our efforts to spread the message that together we can end AIDS: #unidoscontraelsida.

On December 1st, Salud por Derecho will be publishing a short version of the ask in key newspapers, including El Mundo, ABC, and La Razon in order to gain greater visibility and support for this important issue.

Therefore, we invite you to take action by supporting this call to our leaders to maintain the fight against AIDS. With your signature, on Wednesday, March 6th 2013, we will be 1000 days away from achieving one of the most important Millennium Development Goals: Ensuring 15 million people are on treatment by 2015 and this will be the moment in which we, with your support, urge the Spanish government to follow through on its commitments in the fight against AIDS.