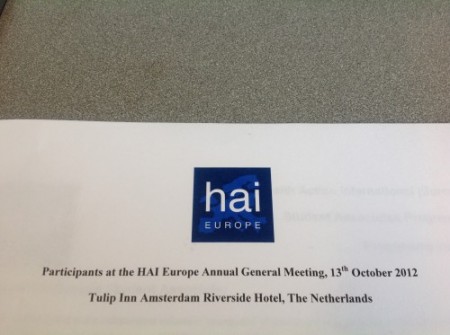 Last weekend, Health Action International (HAI), a leading global network of organizations, experts and academics working on innovation in health and in access and rational use of drugs  organized their Annual General Meeting which took place on the 12th and 13th of October in Amsterdam. Salud por Derecho recently joined as a new member of the network and for the first time we have participated in the meeting.

The Annual General Meeting was more oriented to the internal management and to share with all members the activity that took place during the year 2012. It was preceded by an open seminar aimed to discuss the necessity of introducing scientific practices based on the principle of “open data” for the public, and especially experts, and the need to access information originating in clinical trials. Using the case of Tamiflu, where lack of transparency in reporting clinical trials were dropped during the bird flu “emergency” created great controversy about the lack of transparency in information accessible to the public about the effects and efficacy of the drug. The topic on how to strengthen European legislation and regulations to prevent similar cases were discussed during the Seminar. An editor of the British Medical Journal said the magazine has launched a campaign to promote open access to scientific data and address this matter.

The involvement of Salud por Derecho in HAI responds to the need of a greater commitment to the organization’s strategy in Europe. In addition, work on the new European research framework program, Horizon 2020, innovation and new models will be part of the issues we have in common and on which we both seek to develop synergies. The next HAI Europe Annual General Meeting will be held in Madrid in the fall of 2013 and at Salud por Derecho we are very pleased to be able to serve as the host organization.