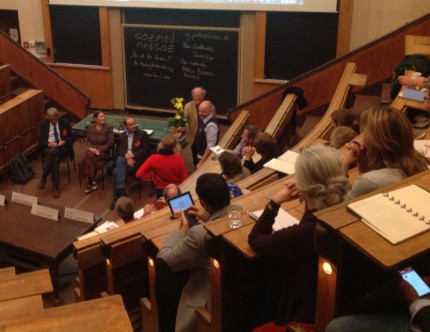 Once again, Salud por Derecho participated in Health Action International (HAI) Europe’s Annual General Assembly which took place on September 22nd in Berlin, where Vanessa López, the director of the foundation, was named a new board member.

Beyond the traditional agenda where formal and associative issues are addressed, various members had the opportunity to present the projects they are developing in their respective organizations. Among the projects presented, the German NGO Buko Pharma explained the activities that they are carrying out in universities through their Med4all project which seeks to promote the use of socially responsible measures in research.

One of the main issues addressed in HAI Europe’s Assembly was the access to medicines situation in Southern European countries that have been most affected by the crisis. This was also one of the main topics that discussed during the public conference on global health that preceded the Assembly and was organized by the University of Charité’s Institute of Social Medicine, Epidemiology and Health, IPPNW and HAI Europe. This conference, especially geared toward young professionals and medical and pharmacy students as well as from other public health-related disciplines, centered on analyzing the production of medicines. Salud por Derecho, together with HAI, led a workshop on access to medicines in Greece and Spain.

One of the main conclusions was that the situation in both countries is far from being similar, as Greece does not yet have a clear policy on support for generic drugs and there are essential medicines that are not being provided to Greek citizens. In Spain, there is great difficulty in understanding the true reach that the copayment measures that have been introduced by the Government are having on the most vulnerable members of the population. Despite the virtual inexistence of data analyzing this impact, it seems that a large part of the access to medicines problem in Spain could be related to the exclusion from health care of people and groups who are especially vulnerable, such as those who are retired or unemployed, those who are most affected by the worrying economic situation. On the other hand, for many experts, Spain has traditionally been a country with excessive over medication, that together with the difficulty in understanding the added therapeutic value of certain “innovative” medicines in comparison to what already exists, complicates the capacity to uncover a true diagnostic of the health impact of such measures.