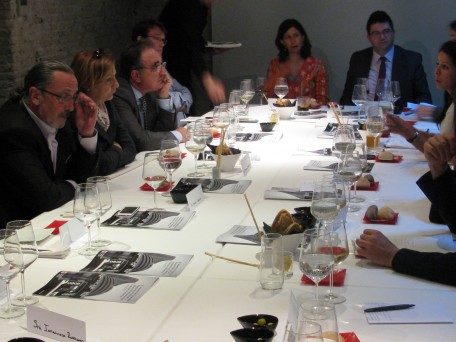 Salud por Derecho y Economistas Frente a la Crisis Organize Political Actors, Economists, and Members of the Civil Society in a lunch-debate to Discuss the Implementation of The Financial Transaction Tax

On April 8th, in the Campaign for the Robin Hood Tax in Madrid, Salud por Derecho and Economistas Frente a la Crisis organized a lunch and discussion about the implementation of the Financial Transaction Tax (FTT) with deputies, economist senators, representatives from the world of politics and cooperation, and representatives from European embassies and civil society organizations.

The lunch began with a presentation of the report, “The Financial Transaction Tax in the Framework of Enhanced Cooperation in the EU: Evolution and Perspectives,” by its authors, Manuel de la Rocha Vásquez and Érika Rodríguez Pinzón. The presentation was followed by a lively debate, in which diverse points of view agreed that the FTT should be understood not simply as a mechanism for tax collection, but as one of the only instruments for taxing the activity of the financial sector in Spain, which barely pays taxes, and also as method to help reduce speculative movements.

In general, all the attendees also agreed that the implementation of the FFT would be insufficient to solve all of the problems of the financial sector or revenue for the public coffers, but that the tax is a first step to achieving greater regulation of financial markets. However, more, far reaching regulatory measures would still be needed.

There was also widespread agreement on the need to identify the destination of the funds collected by the FTT early, and that this tax applies to all financial products, including bonds and derivatives in addition to stocks. Further, those in attendance were concerned that the use of the funds is not currently being discussed in the negotiations, but they were in favor of the proceeds being used in the fight against poverty both inside and outside Spain and Europe.

The hope is that on May 6, at the next ECOFIN meeting, the 11 EU countries, including Spain, who have committed to the tax, will reach an agreement on its implementation. Despite the proximity of this date, the Spanish Government’s position on specific aspects of the tax it is still unclear. They declined the invitation to the debate.

Finally, the debate highlighted the popular support and political consensus between the parliamentary groups and political parties that the approval of this tax relies on. Thus, the government would have broad support behind an ambitious position that would maximize the collecting potential of the FTT, its ability to reduce speculative movements, and its possibility to finance social policies and global public goods.

The Team of Salud por Derecho

Read here the conclusions of the Debate Lunch on the FTT.