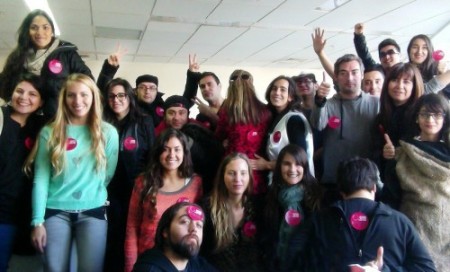 On May 24th a campaign called SOMOS was held in Spain, an initiative, led by 35 NGOs, that seeks to spread solidarity throughout society, as well as to thank people who collaborate with these organizations through their economic support. In addition to actively participating in this campaign, Salud por Derecho learned that the initiative had crossed borders and had arrived at an office in Santiago, Chile, where the employees also wanted to show they were committed to turning things around and wearing their clothes inside out.

The person “responsible” for this initiative in Chile is Trinidad Ugarte. Trinidad works in an advertising agency and on May 17th she received an e-mailing from a Spanish NGO informing her about the campaign SOMOS. Without a second thought she decided to enter the website and print out all the suggested materials: posters, flyers, badges and stickers. With all of the material ready she began to rally her peers to carry out the campaign in their own office.

Trinidad tells us that her motivation for doing this was simply to help people become aware of the need for solidarity, “The truth is I’ve always been curious and have had the desire to help in some way with these global issues that the campaign SOMOS focuses on”, and that she is also concerned that in Chile “there are tremendous economic disparities, extreme poverty and severe deficits in health services and especially in education, which is the basis of most of the problems. There are other priorities and it is difficult to raise awareness on the global flaws which eventually affect us all because they are also reflected in a society like ours.”

What happened at this office on the other side of the world is evidence of how we live in an increasingly globalized world and how international issues are also relevant to people beyond their own borders. Social injustices that NGOs like Salud por Derecho want to change are based on the need to enforce the human rights that all human beings share – regardless of where we live. The reason why the SOMOS campaign is successful is that values like empathy and solidarity are also universal, and there are many people who want to fight the existing inequalities that affect the global society in which we live.

We share with you the picture which shows that Trinidad succeeded in generating interest among her colleagues and we hope that each day more people like her are encouraged to work to expand and promote the need of a more committed society with causes that strive for greater equality and human rights. At Salud por Derecho, we will continue to work to achieve these same goals and we are even thinking of naming Trinidad our awareness-raising Ambassador in Chile since she confesses that if she had had more time she probably “would have had all of Chile inside out!”