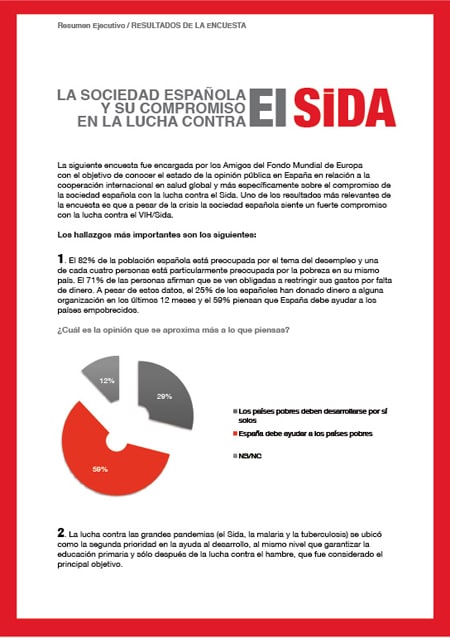 Survey Results: Despite the Economic Crisis, Spanish Society feels strongly committed to the fight against HIV/AIDS

Today, Salud por Derecho, working alongside the Friends of the Global Fund Europe, organized a breakfast event in Casa America entitled “Spain and the Global Fund to fight AIDS, Tuberculosis and Malaria: a successful alliance in saving lives.” Along with other actions that Salud por Derecho is organizing to raise awareness around World AIDS Day, this event specifically sought to launch the results of a survey funded by the Friends of the Global Fund Europe and carried out by CREDOC, “Spanish Society: It’s commitment to international cooperation and the fight against HIV/AIDS.”

Speakers at the event included:

The goal of the survey was to better understand the state of Spanish public opinion related to international cooperation and global health and specifically related to Spanish society’s commitment to the fight against AIDS.

Some of the most important findings of the survey include:

You can take a closer look at a summary of the survey here.