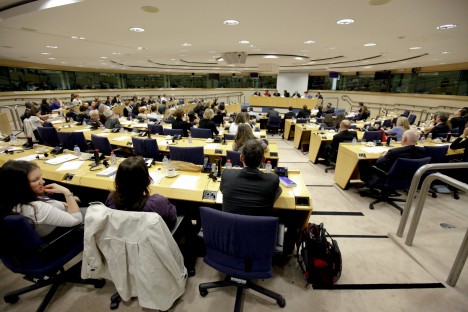 The Will to Win: Europe and the Global Fund to Fight AIDS, malaria and tuberculosis.

The will to win is the title of the event organized by Friends of the Fund on the 11st of April in the European Parliament, in Brussels. Vanessa López, Executive Director of Salud por Derecho, participated as speaker.

The session was opened by Andris Piebalgs, European Commissioner for Development, who stressed the Commission’s commitment to the Global Fund despite having frozen the 2011 contribution and put in value the 10% increase in the contribution with respect to 2010. The Minister of Health of Kenya, Ben Wambui Mugo, also attended the event and explained how the Global Fund programs were changing the lives of thousands of people in Kenya, a reality extended to those other countries that also receive financial support from the Global Fund to develop their plans against HIV/ AIDS, and malaria tuberculosis.

Michel Kazatchkine, Executive Director of Global Fund, highlighted the importance of the contribution of the European Union as a whole to the Global Fund, from which come 51% of their resources. Professor Kazatchkine stressed that this year marks ten years since was decided to create a financial institution to mobilize financial resources to fight the pandemic in poor countries and to make into reality the goal of universal access to prevention, treatment and care for HIV / AIDS. The MEP Charles Goerrens and former France Ministers for Development and former German Minister for Development were also among the speakers at this event.

Vanessa Lopez, Executive Director of Salud por Derecho, spoke about the role of civil society in the Global Fund and how this financial instrument is supporting their efforts in responding to the three epidemics. In her speech she also mentioned the need for the Global Fund to continue having a role in the European Union’s common global health policy stating that ” The Global Fund is being crucial to cover saving-lives treatment and prevention for AIDS in general population, but overall, for those vulnerable and marginalized groups often neglected in national or bilateral program. The equity and efficacy agenda of the European Union and European Commission must have this into consideration. Moreover when the recent EU global health policy has not preserved, at least on paper, the position that the Global Fund deserves on this regard”. Ms. López, also denounced the Spanish government’s decision to freeze contribution for the Global Fund, even thought the Government had not yet committed any amount for the period 2011-2013. This decision made the Spanish civil society show their clear opposition to the decision.

You can read the speech here.