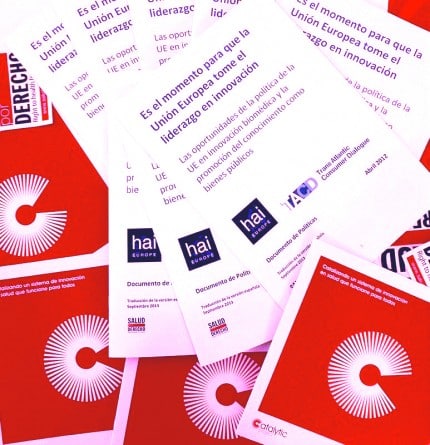 Time for the EU to lead on Innovation: A Position Paper

Everybody talks about the weaknesses in the current biomedical R&D system.  But what does this actually mean?

This document developed by HAI Europe and Transatlantic Consumer Dialogue and translated to Spanish by Salud por Derecho, describes the major problems in the current R&D system and explains the alternative proposals that can be implemented in Europe to promote access to medicines, innovation and knowledge as global public goods.

As the preface describes:

There is solid evidence that research, development and production of new medicines are usually not oriented by public health demands, but rather by the demands of the market and the economic profit of the companies that develop and commercialize them. Many qualified voices point to the failure of medical innovation in reaching the majority of its objectives given that it is usually expensive, inefficient and not transparent.

In 2012, we wrote this document to gather together and explain some of the most important initiatives that are taking place in biomedical innovation and open management of scientific knowledge and which are being proposed from different sectors. Now, we consider it important to present in Spanish this brief review of promising proposals that seek to promote open science, research oriented toward the common good and the creation of public goods. The goal of the present document is to contribute to the debates that are taking place at the European Union, especially in the context of the implementation of the Horizon 2020 and the World Health Organization research programs.

After taking a look at the document, we would like to hear your opinion. Let us know what you think by sharing your ideas and comments with us. To learn more about the Catalytic Project, click here.

The Spanish translation of the paper can be found here.