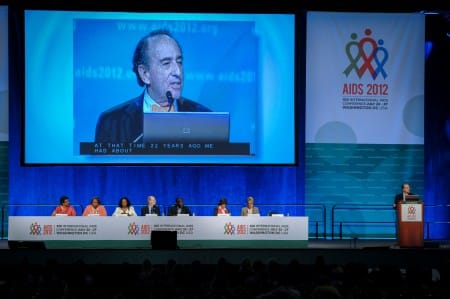 Turning the tide of the epidemic

The International AIDS Conference had a panel yesterday which specifically addressed the situation of HIV/AIDS transmission in the world. The panel was led by four experts in this issue.

The first panelist was Dr. Barton Haynes, who spoke about the progress in the development of the HIV-1 vaccine. The immunologist explained not only why it is so important to achieve a vaccine to prevent, but also how an eventual vaccine to neutralize antibodies would work. He also explained the breakthroughs that have occurred in the past two years and the synergy between the various actors who are working in the field of HIV.

The second panelist was Dr. Chewe Luo, who lectured on the need to prevent that children and young people acquire the disease. One of the issues highlighted was the need to work towards the elimination of mother-child transmission, although there has been great advances in this area, she said there was still room for improvement. One of the issues she underlined the most was regarding the worrying situation of young boys and girls with HIV, as only 28% of them are currently under treatment and 50% of them will not achieve their two years of age. She similarly called for the need to invest in further research to develop drugs tailored for children. She concluded her intervention calling for action towards taking into account teenagers since it was imperative to protect this vulnerable group which has special needs.

Linda Scruggs was the third speaker, an activist on HIV and women. In addition to her very moving story about her own life and her fight against the disease, she emphasized the need to take into account the female face of HIV / AIDS today. Scruggs appealed to incorporate women on issues related to HIV and the fact that women cannot be excluded for another 30 years, since it would be impossible to win the battle against the disease without them.

The last panelist was Dr. Geeta Rao Gupta, who spoke about the situation of girls and women with HIV worldwide. Like Scruggs, she exposed the feminine aspect of the disease, for example that as many as 60% of the 2.2 million teens who have HIV are women. She made a special call for the need to address and tackle the transmission mechanisms during this period of life.