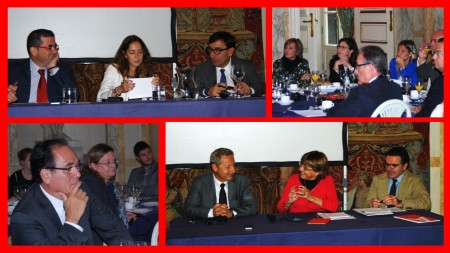 Although we are in a key moment in the fight against AIDS, TB and Malaria, Spain announced that there will be no contribution to the cause

In order to explain the current situation of these three pandemics, the organizations Friends of the Global Fund Europe and Salud por Derecho, in collaboration with Doctors Without Borders Spain and ISGlobal, organized the breakfast conversation: HIV/AIDS, Tuberculosis and Malaria: At a Tipping Point, an event that was hosted at the French Ambassador’s Residence in Madrid. During the meeting, Mr. Francisco Quesada, from the Office of the Secretary General of International Cooperation, announced that given the current economic climate there will not be a budget line item in FONPRODE that is repayable and, therefore, there will be no contribution to the Global Fund to Fight AIDS, Tuberculosis, and Malaria.

The goal of the breakfast, which was attended by about sixty people including MPs, senators, government officials, diplomats, academics and representatives of civil society organizations, was to outline the global landscape in the fight against the three pandemics, as well as the situation of the Global Fund.

Among the speakers, we had Dr. Mariângela Simao from UNAIDS who shared the latest data that has been published on the progress in the fight against AIDS; for example, that since 2001 cases of new HIV infections have fallen by 33% and among children by 52%. Despite advances made, she particularly stressed the need to strive toward greater achievements and, quoting a phrase used often by UNAIDS Secretary General Michel Sidibé and originally from Nelson Mandela, she said “When the water starts boiling, it is foolish to lower the flame.”

On behalf of the Global Fund, Mr. Stefan Emblad, director of resource mobilization, participated, sharing with the participants the crucial moment that the organization is experiencing, given that the Global Fund will hold the IV Financial Replenishment Conference on December 3, during which they seek to raise 15 billion dollars from donor countries for the period 2014-2016. The representative emphasized the risk that we would be facing if this figure is not reached, given that turning back the progress made would be even more expensive financially.

Europe usually provides about 70% of the funds given by donor countries to the Global Fund. Facing the upcoming Financial Replenishment Conference, some neighboring countries have already announced their contributions: Germany $1,260 million USD, France $1,400 million USD, United Kingdom $1600 million USD and the Nordic countries $750 million USD. Spain, despite having been one of the major donors to the Global Fund in previous years, has not made any contribution to the organization since 2011, and despite the commitment to pay 10 million Euros in 2012, this money was never disbursed.

In this context, the last panel was presented, in which two parliamentary groups from Congress’ Committee on Development Cooperation shared their perspective, Mr. Juan Carlos Grau from the Popular Party (PP) and Mr. Federico Buyolo from the Socialist Party (PSOE).[1] During this session, the speakers spoke about the unanimity of all parliamentary groups in their support of the need to maintain the fight against AIDS and funding organizations like the Global Fund. Similarly, differences were expressed in relation to the general state budget being discussed at this time and that the budget line for development cooperation has been cut again. From the PSOE’s perspective, Buyolo stressed that in the supposed budget recovery, the line item for cooperation is not being reflected, while Grau lamented the budget cuts but blamed the economic situation that had been inherited. Either way, the parliamentarians pledged to introduce amendments to the budget with the aim of trying to ensure funding for the Global Fund.

Finally, participation in the event on behalf of the Government was represented by Mr. Francisco Quesada from the Office of the Secretary General for International Cooperation, who announced that despite the government’s great admiration for the work that the Global Fund carries out, there will probably be no contributions to the organization in the budget for next year or the following. In relation to the question about being able to use part of the proceeds from the future financial transaction tax (Robin Hood Tax / Tobin Tax) to international cooperation, the representative of the Secretary General expressed his hope that this might be the case.

The outcome of the breakfast was bittersweet, given that despite repeated political commitments made by the Spanish government to development cooperation in general and the fight against the three major pandemics in particular, these commitments have not been backed by an economic contribution in line with the political discourse. At this point, the government has not followed through even with its symbolic commitments, which are the only adjective that can be applied to the promise of 10 million Euros made last year that never went into effect. Unfortunately, neither the 28 million people who should be currently receiving antiretroviral therapy (rather than the 9.1 million who are receiving at this time), the 660,000 people who died from malaria last year (86% of them were children), nor the 1.4 million people who died last year because of TB, cannot stay alive only with empty political commitments.

[1] Due to the parliamentary activity related to the General State Budget, the other invited parliamentary groups were not able to attend, although they apologized and regretted not being able to participate.