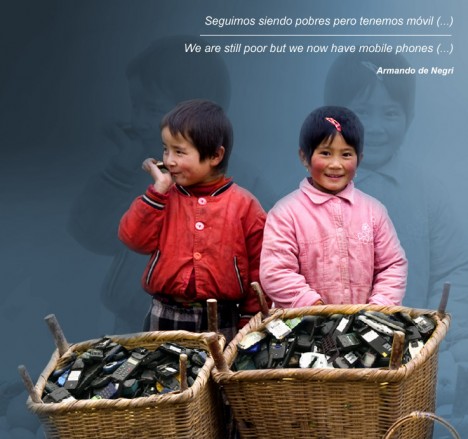 We are still poor but we now have mobile phones

The first session of the forum has begun capturing the main conclusions reached in Brasilia at the end of last year at a conference attended by over 600 people, including many governments, whose main conclusion was the need to ensure the right to social security for all whether they contribute financially as if they don’t, or even if they through informal economy, which is the case in many developing countries.

It is necessary to understand health as a universal right and therefore all countries are responsible to ensure the universalization of that right.

As we advocate for on Salud por Derecho, at the opening session of the Forum the importance of redistribution of wealth has been stressed. We can not expect the market economy automatically redistributes wealth.

What does this mean? Armando de Negri of the Movement for People’s Health simplified it with very illustrative phrase: We are still poor but we have mobile phones.

Because universalization of social services should be the principle on which to base the organization of society, because the crisis, this or that to come are not excuses for progressive and inclusive policies to progress. Because those who benefit from and progress and economic growth the most, with higher income and better wealth, should contribute more and pay the costs of a welfare system to benefit everyone.

As Ilcheong Yi from the Institute for Research Institute for Social Development of United Nations, Europe based itself on a similar model of redistribution of responsibilities and wealth when created its model welfare state in the 50’s-70’s. He insisted that this must be the example to follow by the developing countries. Botswana, Cotonou, Brazil, Costa Rica are among those countries already on the right path.

We must recover State’s value as provider of basic rights and services. For that reason, universalization of health and social security must take part of the political agenda and its not doing it at the moment.

According to what has been explained at this session, Government Leaders of the continent under the pretext of lack of resources are avoiding their responsibilities. Majority of the citizens of those countries are not aware of their rights and therefore can not claim their leaders to act.

As remarked by Mr. Yin, it is not necessary to wait to have all the resources necessary to secure the universality of the rights, but what is crucial is to secure a early model where those principles are ensure, without excluding anyone.

Tomorrow’s session will discuss strategies for educating political leaders on these values, and the barriers or challenges to the adoption in universal health systems.

We will keep you Infomed!