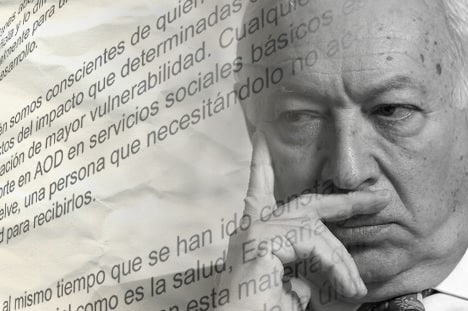 Open letter to the Minister of Foreign Affairs and Cooperation

Yesterday, the inauguration of the XIX International AIDS Conference took place without Spain declaring its economic contribution to the Global Fund to Fight AIDS, Tuberculosis and Malaria, which the government had committed to resume. For this reason, Salud por Derecho and MĂ©dicos sin Frontera decided to send a letter to the Minister of Foreign Affairs and Cooperation, Mr. Jose Manuel Garcia-Margallo, expressing our concern. In Salud por Derecho we have also published a whole page open letter, very similar to the official letter, in various national newspapers (El Mundo, La Razon and ABC) to extend our concern to the rest of society.

Due to the decrease in funding, the Global Fund had to cancel its 2011 economic round, removing the G20 from its list of recipients of assistance to combat AIDS, and its target number of people receiving antiretroviral treatment are in danger due to the economic reduction of donor countries.

Spain became the fourth largest donor to the Global Fund in 2009, when its contribution was 200 million Euros. The following year, 50% was cut and last year Spain withdrew all of its contribution. The disappearance of Spainâ€™s funding is alarming because of the weight and importance it once held for the Fund, especially considering there was a previous commitment.

Scientific advances and efforts carried out by States and organizations, such as the Global Fund, have truly changed the course of the disease in recent years, enabling access to antiretroviral treatment to more than six million people worldwide, reducing not only the number of new infections by 20 percent, but also mother-to-child infections, etc. Despite this encouraging data, the economic cuts in the area may seriously jeopardize the progress made, just when we were at a turning point in relation to the disease.

Fortunately, the Minister GarcĂ­a-Margallo and the current government see the importance that the Global Fund has in the fight against AIDS, Tuberculosis and Malaria; reason for which they announced five months ago that Spain would once again contribute resources to the Global Fund. Salud por Derecho welcomes the initiative of the Government in announcing their recommitment, but we are concerned that, to date, they have yet to confirm the exact amount that will be destined to the Fund. We hope the International AIDS Conference will encourage the Government to formally announce the contribution to the Global Fund this year.

You can see a translation of the Open Letter published in the newspapers here.