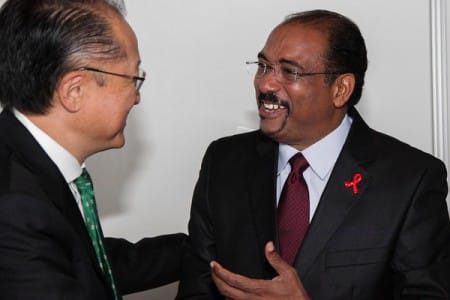 The International AIDS Conference was inaugurated yesterday in Washington with great anticipation among the approximately 25,000 people who will be participating in this event until the end of the week. For 22 years the US hadn’t hosted the Conference because of the prohibition of people living with HIV to enter the country. The ban was lifted three years ago, a move praised by the Director of UNAIDS, Michel Sidibé, during the inauguration. Sidibé also stressed the importance of continuing investment in HIV, in order to achieve the goal of an AIDS free generation.

The opening session also featured the statements of South African President Kgalema Motlanthey, the United Nations Secretary General Ban Ki-moon and World Bank President Jim Yong Kim – whose speech appealed to the need to work towards the total eradication of the epidemic.

The Conference is being held in a positive environment due to recent scientific advances that suggest that we are near the end of the epidemic, and UNAIDS released a heart lifting report last week which reflects the progress that has been made in relation to the disease in recent years.