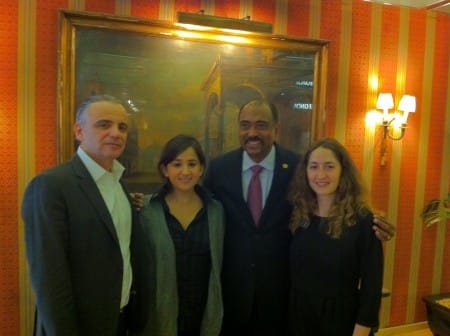 The head decision makers of the United Nations are in Madrid this first week of April. On the one hand Madrid hosted the celebration of the High Level Consultation on Hunger, Food Security and Nutrition, which was held yesterday, April the 4th. On the other hand, the UN decided to hold their Chief Executives Board for Coordination on 5 and 6 April, where the heads of each of the 29 United Nations agencies meet with the Secretary General – Ban Ki Moon – to coordinate their actions.

During the meeting Lourez shared the most important actions that are being carried out by UNAIDS, the biggest challenges they are facing and made a special emphasis to the situation people are living in Eastern Europe and Central Asia, where the incidence of people with HIV has increased in recent years. Due to the prior, they discussed the need to maintain this situation visible to the European Union, to increase its support in this regard.

From the other end, Vanessa Lopez informed the Deputy Director about the most important actions carried out by Salud por Derecho in relation to the fight against AIDS. She also shared her concern about the failure of the Spanish government to follow through with its € 10 million commitment for the Global Fund to fight AIDS, Tuberculosis and Malaria. Spain, which was the fourth largest donor to the Global Fund in 2009, has spent nearly three years without making contributions to the organization.